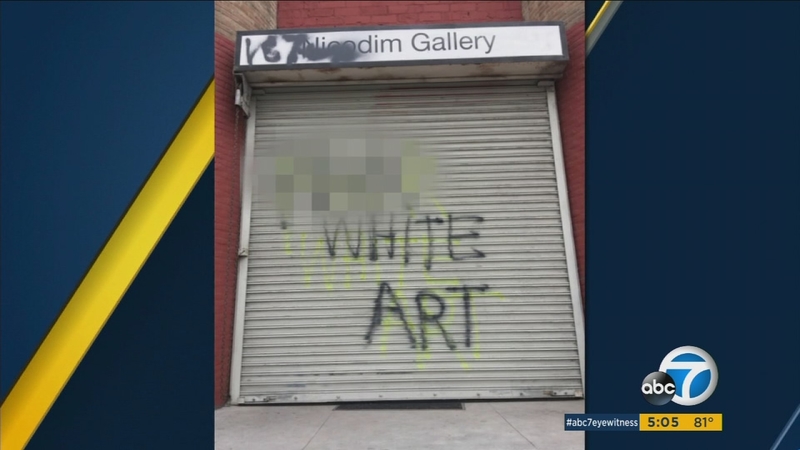 BOYLE HEIGHTS, LOS ANGELES (KABC) -- Art galleries in Boyle Heights have been vandalized and police said they're investigating the acts as hate crimes.

Los Angeles police said the three cases took place in October and that the suspects targeted what they referred to as "white art" with graffiti.

The suspects wrote 187, the penal code for murder in the upper left corner.

"They say their demands are simple, I should get the hell out of here," Mihai Nicodim, who owns Nicodim Gallery on South Anderson Street said.

Nicodim said he was just one of several others in the area targeted by protesters over the past year.

"Every time we have an opening, like maybe two months ago when we actually had potato guns shot at us, which is quite dangerous," Nicodim said.

Elizabeth Blaney, an activist with Union de Vecinos, said the crimes may be an indication of a much larger issue.

Blaney has been fighting development in the Boyle Heights area and said she considers the development to be gentrification.

She believed it's caused rent to increase throughout the predominantly Mexican-American community and has pushed longtime residents out of the area.

While she denied any involvement with the vandalism cases, Blaney said she represents many who believe the new galleries need to go.

"We are asking the galleries to leave," Blaney said. "Yes, that is a demand from community members to leave because they are having a negative impact on this neighborhood."

Nicodim said despite the pressure, it's his right to do business on any street he chooses.