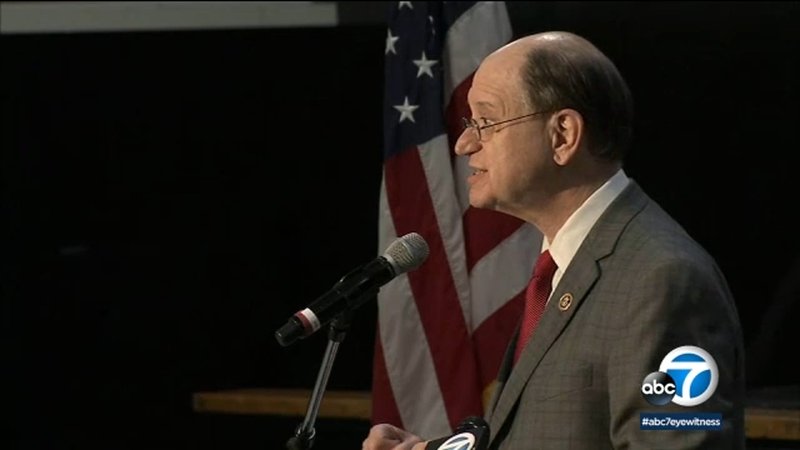 GRANADA HILLS, Calif. (KABC) -- San Fernando Valley Congressman Brad Sherman hosted a town hall meeting Saturday in Granada Hills, where there was demand for answers about the possible impeachment of the president.

The congressman answered a wide range of questions about universal health care, social security and immigration, but most of them centered around the impeachment of the president and the Mueller investigation.

"If I receive a subpoena and I don't respond, bad things happen to me," one voter said. "Why is that not the case in Washington?"

Many were also demanding to know why more isn't being done on the issue.

In 2017, Sherman introduced articles of impeachment against President Donald Trump based on obstruction of justice.

The congressman told the crowd it will be very difficult to remove the president with the current Senate.

"We've got to continue the investigation, but let's not delude ourselves. We should be getting this information out. It will be helpful for the American people to know, but it doesn't mean we're going to be able to remove the president," Sherman said.

He added that there is so much more going on in Washington than just the fight over Trump, but he said he knows it is a serious concern for his constituents.

"There are so many things that we need to address in Washington. We do talk about the president and his obstruction of justice, but we're working on everything else. Whether we can reach consensus and whether we can get the president and the Senate to agree, I don't know," he said.
Report a correction or typo
Related topics:
politicssan fernando valleygranada hillsimpeachmenttown hall meetingpresident donald trump
Copyright © 2022 KABC Television, LLC. All rights reserved.
TOP STORIES
Nurse dies days after being attacked at DTLA bus stop
SoCal coastal areas see damage from tsunami surge
Expect more worrisome COVID variants after omicron, scientists say
Tuskegee Airman Brig. Gen. Charles McGee dies at 102
FBI identifies hostage-taker at Texas synagogue
Lori Loughlin, Mossimo Giannulli's Hidden Hills home burglarized
Legendary KABC Radio host Michael Jackson dies at 87
Show More
LA County reports 53 new COVID deaths, 43,883 more cases
Police increase patrols near synagogues in LA and Beverly Hills
Man fatally stabbed while breaking up fight in Koreatown
Wis. hunters set tangled bucks free instead of killing them: VIDEO
LAUSD superintendent: Safest place for students to learn is on campus
More TOP STORIES News