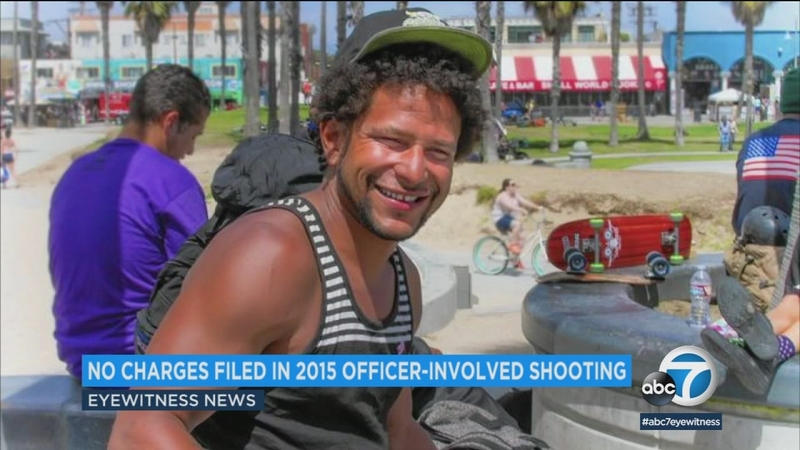 MORE: Transient man shot to death by LAPD in Venice after 'disturbing the peace' call

According to prosecutors, an 83-page report reached the conclusion that there was "insufficient evidence" to prove that Officer Clifford Proctor "acted unlawfully in self-defense and in defense of others when he used deadly force against Brendon Glenn."

"After an independent and through review of all the evidence in this case, we cannot prove beyond a reasonable doubt that Officer Proctor did not act within the law," Los Angeles County District Attorney Jackie Lacey said in a statement.

Glenn, 29, was shot to death in Venice on May 5, 2015 by Proctor after he and another officer responded to a report of someone "disturbing the peace." Friends of Glenn claimed he was panhandling.

After officers spoke with Glenn, he walked away in the direction of the boardwalk.

A short time later, the officers "observed the suspect physically struggling with an individual on the sidewalk west of their initial location," LAPD said in a statement at the time. The responding officers made contact with the suspect, and at some point, there was a struggle between the man and the two officers. That's when the shots were fired.

It was later revealed that Glenn was shot twice in the back. Glenn was unarmed, authorities confirmed.

Proctor said he fired because he thought Glenn was reaching for another LAPD officer's gun, but surveillance video showed that wasn't the case. The L.A. Police Commission unanimously deemed Proctor out of policy and LAPD Chief Charlie Beck urged prosecutors to file charges against Proctor.

Prosecutors, however, said evidence did not support an unreasonable belief by Proctor that Glenn may have been reaching for the other officer's gun and that Proctor would not have been "unreasonable in believing Glenn posed an imminent threat of great bodily injury to himself or others."

According to prosecutors, and independent use-of-force expert reached the same conclusion.

In 2016, the Los Angeles Police Department settled with Glenn's family for $4 million.

MORE: Family of man fatally shot by LAPD in Venice speaks out after $4M settlement