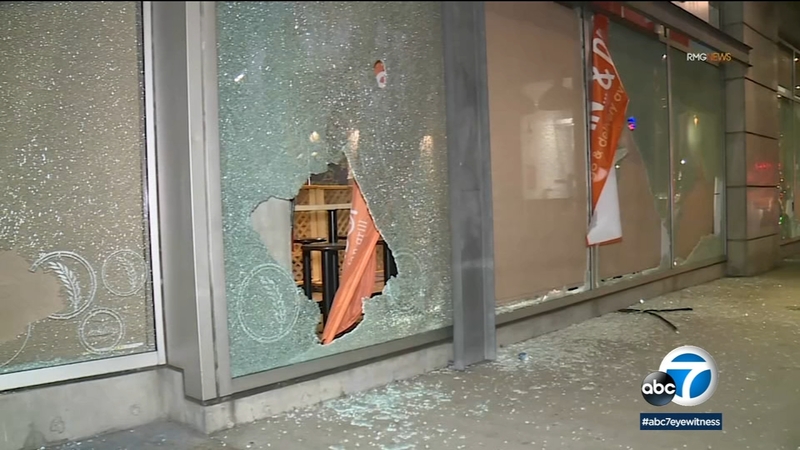 Breonna Taylor protesters clash with LAPD on her death anniversary

HOLLYWOOD, LOS ANGELES (KABC) -- Clashes with police and vandalism were reported near a protest in Hollywood on Saturday marking the first anniversary of Breonna Taylor's death.

As many as 200 demonstrators gathered at Hollywood Boulevard and Vine Street to call for justice for Taylor, who was fatally shot by police in her Louisville, Kentucky home one year ago, and whose death triggered nationwide protests. Video from the scene showed who police identified as protesters climbing onto a police car and helmeted officers taking up positions near Hollywood Boulevard and Vine Street.

There were also reports of vandalism in the area. The scene was cleared shortly before 1 a.m.

The Los Angeles Police Department's Operations Center had few other details, according to Officer D. Orris. There were calls for backup but it appeared the LAPD Hollywood Station was covering the situation, he said.

A total of 11 people were arrested, according to Officer Cooper. That includes five for assault with a deadly weapon on a police officer, three for possession of a prohibited item, two for unlawful assembly and one for battery on a police officer.

The anniversary of Breonna Taylor's death is Saturday, and her family is still seeking justice.

Memorials to Taylor were held in Hollywood at 11:30 a.m. and 7:30 p.m., one day after Kenneth Walker -- who was Taylor's boyfriend, and in the home when police raided it -- filed a federal lawsuit against the Louisville Metro Police Department, alleging his constitutional rights were violated during the botched raid, according to multiple reports.

In a tweet Saturday, President Joe Biden tweeted, calling Taylor's death "a tragedy, a blow to her family, her community, and America.''

He added, "As we continue to mourn her, we must press ahead to pass meaningful police reform in Congress. I remain committed to signing a landmark reform bill into law.''

Taylor's family continued their call for justice as hundreds of demonstrators gathered in downtown Louisville on Saturday.

Austin spoke from a stage set up in Jefferson Square Park, which became an impromptu hub for protesters during months of demonstrations last summer. Flanked by two hand-painted murals of Taylor, activists repeated calls to charge the police officers who killed the Black woman during a raid at her apartment.

The crowd shouted Taylor's name and "No justice, no peace" as they gathered near an outdoor memorial that includes a mural, posters, artwork and other mementos honoring Taylor's life. Some organizers gave away food during the speeches.

Taylor's front door was breached by Louisville officers as part of a drug raid in the early morning hours of March 13, 2020. Her boyfriend fired his gun once, saying later that he feared an intruder was entering the apartment. One officer was struck, and he and two other officers fired 32 shots into the apartment, striking Taylor five times.

Taylor's death initially flew under the media radar, as the COVID-19 crisis shut down society, but George Floyd's death in Minnesota and the release of a chilling 911 call from Taylor's boyfriend in late May sparked interest in the case.

A grand jury indicted one officer on wanton endangerment charges in September for shooting into a neighbor's apartment, but no officers were charged in connection with Taylor's death.

An ongoing federal investigation could be wide ranging and is regarded by many as the last chance for justice for Taylor's death.

The anniversary of Taylor's death comes as the trial gets underway in Minneapolis for Derek Chauvin, one of four officers charged in the death of George Floyd.