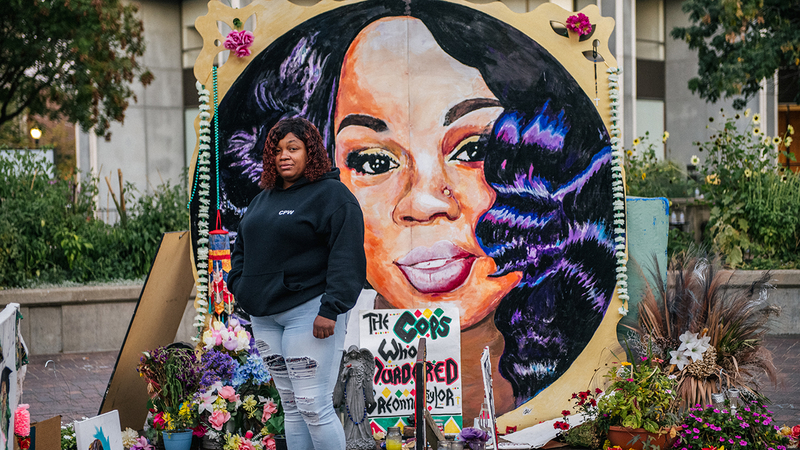 LOUISVILLE, Ky. -- Tamika Palmer has been in the same battle for justice in Breonna Taylor's death for the last year.

Palmer said her daughter was killed senselessly by police and in her eyes no one is being held accountable for it.

Facing this reality makes her angry. But Palmer said she will never give up her fight to see the officers criminally charged.

"It can't end here," Palmer told CNN. "I'm still out here, I'm still doing what I need to do to get justice for Breonna to make sure that people do right by her."

Saturday will mark one year since 26-year-old Taylor was fatally shot during a botched police raid at her apartment. Her death sparked protests across the country and became central to the racial reckoning last summer with demonstrators demanding racial equality and police accountability. It also renewed conversations about police brutality against Black women who activists say are often overlooked and rarely get justice in their cases.

Palmer this week filed internal affairs complaints against six officers with the Professional Standards Unit of the Louisville Metro Police Department, according to the complaints provided to CNN by Palmer's attorney, Sam Aguiar.

A grand juror who won a court fight to speak publicly about the Breonna Taylor investigation is taking issue with statements by Kentucky's attorney general.

In the complaints, Palmer alleges the behavior of four officers was "unacceptable, intolerable and contributing factors to Breonna's death and the deficient investigation thereafter."

In a statement to CNN, Aguiar said, "These internal affairs complaints were filed to get answers, explanations and accountability."

Since protests last year over Taylor's death, Louisville has passed Breonna's Law, which banned no-knock warrants, fired three of the officers involved in Taylor's death, and settled a historic $12 million lawsuit with Taylor's family that included an agreement for the city to institute police reforms. Last May, the FBI launched an investigation into Taylor's death. The city also hired embattled former Atlanta police chief Erika Shields -- who stepped down after Rayshard Brooks was killed by one of her officers last June -- to lead its police department earlier this year. Most recently, a Kentucky judge dismissed the charges against Kenneth Walker, the boyfriend of Taylor who was accused of firing one shot that struck an officer during the raid at Taylor's apartment.

Taylor's family and activists say the moves haven't been enough to heal the wounds caused by her death.

They continue to push for the police officers to be charged after a grand jury didn't indict any of them in Taylor's death. Former Louisville police officer Brett Hankinson was the lone officer to face an indictment and that included three counts of wanton endangerment for blindly firing into a neighbor's apartment. They continue to lobby for police reform, saying an end to qualified immunity will be key to getting justice for Black families devastated by police violence. And they continue to demand that police funding be reallocated to Black neighborhoods in Louisville that have suffered from disparities in housing, health care and education for generations.

"It has brought to the surface a lot of the disparities in general that the Black community here has faced," said Keturah Herron, a policy strategist for ACLU Kentucky and a Louisville activist. "Our community is still trying to figure out what it means to heal."

Louisville Mayor Greg Fischer said the city has made police reform a priority and is actively working with the community to address their concerns with racial inequality. But fixing Louisville's problems won't happen overnight, he said.

"One city reversing all of that in the course of a year is a tall task," Fischer said. "Have we been working to do it and do we have the results to show for it? Absolutely."

Shields' appointment was met with opposition from many residents who say the city should have considered their input given the Louisville Metro Police Department's strained relationship with the Black community.

Chanelle Helm, an organizer for the Louisville chapter of Black Lives Matter, said she questions whether Shields was the right fit because she resigned from her Atlanta post immediately after the controversial police killing of Brooks, a Black man.

"It almost seems like our city doesn't want to change or doesn't even want to validate that an uprising took place," Helm said.

Fischer said Shields demonstrates a commitment to racial justice and redefining police. He also noted that a majority Black advisory panel made a unanimous decision to recommend Shields for the chief position.

The department released a statement to CNN saying that an independent review of the agency found "deficiencies" and that Louisville police were working to make changes. The statement also said the department is prioritizing improving trust with the larger community.

"Policing is at a crossroads in our city and across the nation," the statement said. "The Louisville Metro Police Department is committed to the reforms necessary to make this department the best in the nation, and we understand that requires being present and listening to our community."

Kentucky Gov. Andy Beshear, who acknowledged last year that systemic racism exists in the country and his state, also pledged to work for equality.

"We remember Breonna Taylor, her tragic and unnecessary loss and the immense work we have ahead of us," Beshear said in a statement. "I will never understand the unimaginable grief of Tamika Palmer and other family and loved ones, but I am committed to listening and working with others to build a more equitable and fair commonwealth for every Kentuckian."

Sgt. Jonathan Mattingly said the Breonna Taylor shooting had "nothing to do with race" in an exclusive interview with "Good Morning America's" Michael Strahan.

Activists and Taylor's family say they are hoping the FBI probe will result in federal charges against the officers accused of killing Taylor.

Katie Anderson, a spokeswoman for the FBI field office in Louisville, said the FBI has made "significant progress" in its investigation.

"FBI Louisville is actively investigating all aspects of the death of Breonna Taylor," Anderson said in an email to CNN. "FBI Louisville remains committed to bringing this investigation to its appropriate conclusion. The COVID pandemic has obviously presented several unexpected obstacles to completing our investigation."

Lonita Baker, an attorney for Taylor's family, said she believes Taylor's civil rights were violated and is optimistic the officers will face federal prosecution. She also remains hopeful that a grand jury could still indict the officers in Taylor's death. She noted that Jefferson County Commonwealth Attorney Thomas Wine recused himself from the case last year because he was prosecuting Walker. Now that charges against Walker have been dropped, Baker said she wants Wine to revisit Taylor's case.

"Ms. Palmer feels it's important that the officers are held accountable," Baker said. "Because otherwise, what is to stop officers from doing the same thing in the future to someone else?"

Kentucky Attorney General Daniel Cameron said in September that he never presented murder charges against the officers to the grand jury. Cameron said he believed wanton endangerment was the only charge that could be proven beyond a reasonable doubt.

Palmer said it felt like a "punch to the gut" when she learned that the officers would not be indicted for killing her daughter.

"I remember not being able to catch my breath and I couldn't stop crying," Palmer said. "I remember being so angry."

NAACP president Derrick Johnson is calling on the Senate to pass the bill, saying there are too many protections that "allow police to operate above the law."

"Hopefully a standard can be advanced that will allow for transparency and accountability for those who were involved in the killing of Breonna Taylor," Johnson said. "It is an unfortunate day that the shooting through the walls of a neighbor was brought more punishment than the taking of a life."

The grand jury decision in the Breonna Taylor case has been a painful gut punch to protesters throughout the country.

Taylor's death, and the failure to indict the officers, spotlighted the rallying cry for justice for Black women who have died at the hands of police. Last summer, Taylor's name and face was emblazoned on magazine covers, memes and protest signs as advocates and celebrities worked to ensure that her case didn't lose momentum.

Kimberle Crenshaw, the executive director of the African American Policy Forum and founder of the #SayHerName campaign, has worked to highlight the cases of Black women who have been killed by police in their homes.

"We're still in a period of time where we have to make people see that Black women are also the subject of anti-Black police violence," Crenshaw told CNN after the grand jury announced its decision in September. "It's one of the most consistent aspects of our experience across history."

"Historically Black women have never been able to receive justice the way Black men or White folks have," she said.

The need for community investment

In Louisville, protests have died down since last summer and fall. But activists say their fight for justice and equality continues.

Herron said Breonna's Law and the police reforms in the family settlement were "low hanging fruit" in their calls for police to be held accountable for brutality against Black people.

None of the policy changes ensure accountability for police and they fall short of addressing overpolicing of Black neighborhoods, Herron said.

Herron described Louisville as a racially divided community where Black neighborhoods are neglected and marked by abandoned buildings and limited access to jobs, health care and schools.

She said Louisville's police department should cut its budget and invest more money into creating opportunities for Black residents.

"Basic necessities have been taken out of our community," Herron said. "The cry for justice is not just police being held accountable but saying Black people's voices matter."

Helm said Taylor's death has only deepened the Louisville community's distrust in their police department.

However, Helm said it motivated residents to be more politically engaged and pressure elected officials to act on the disparities and systemic racism against Black people.

"We are really dealing with a system that for centuries has maintained power over Black and brown bodies," Helm said. "There is a lot more that needs to happen. And it's really petty to think we would just be satisfied with pieces of justice."