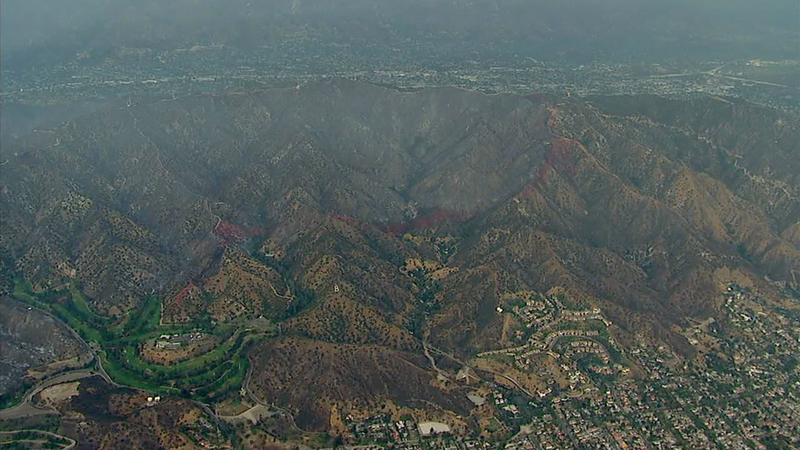 All evacuation orders were lifted Sunday for residents in Sunland-Tujunga, Burbank and Glendale after the large fire moved away from the areas.

Earlier Sunday, Gov. Jerry Brown declared a state of emergency for Los Angeles County due to the effects of the blaze.

All evacuation orders were lifted Sunday for residents in Sunland-Tujunga, Burbank and Glendale after the large La Tuna Fire threatened homes and charred hillsides.

By Sunday night, the fire had grown from 5,865 acres to 7,003 acres, according to fire officials.

About 1,400 people from the city were in temporary shelters, but 90 percent of them have gone back home as firefighters gained the upper hand on the blaze.

Brown's announcement said a Federal Fire Management Assistance Grant has been requested and approved due the fire's magnitude, which requires the "combined forces of a mutual aid region or regions to combat."

The declaration states the blaze is beyond the control of a single government and calls on state agencies to employ state personnel, equipment and facilities to help fight the La Tuna Fire.

The announcement comes after Los Angeles Mayor Eric Garcetti signed a declaration of emergency for the fire Saturday, calling on all the city's available resources to protect residents.

Mayor Eric Garcetti and authorities provided an update on the La Tuna Fire that charred hillsides and prompted evacuations for thousands of residents.

Garcetti's declaration calls on all city departments to take all necessary steps to protect life and property in the area affected by the fire.

Rain suddenly fell in the Southland on Sunday, helping firefighters battling the La Tuna Fire and bringing humidity to an area that needed relief from the heat.

More than 1,000 firefighters from multiple agencies were fighting the flames well into Sunday. Weather conditions were better, with temperatures slightly dropping throughout the Southland. Area winds, however, were expected to be the "biggest challenge" for firefighters.

Fire officials said four people suffered injuries in the blaze, but two were severe dehydration, other had minor burns and one person had an allergic reaction to a bee sting.

A flash flood watch was issued for many Mountain areas, including where the La Tuna Fire is burning, as well as other recent burn areas.

The watch is in place until 10 p.m., the NWS said, adding that burn areas will be especially at risk for debris flows if thunderstorms continue to develop.

The blaze had shut down the 210 Freeway in both directions. It was reopened at 6 p.m. after authorities assessed the area.


During a Sunday afternoon press conference, the Los Angeles County Board of Supervisors plan to declare a state of emergency on Tuesday.