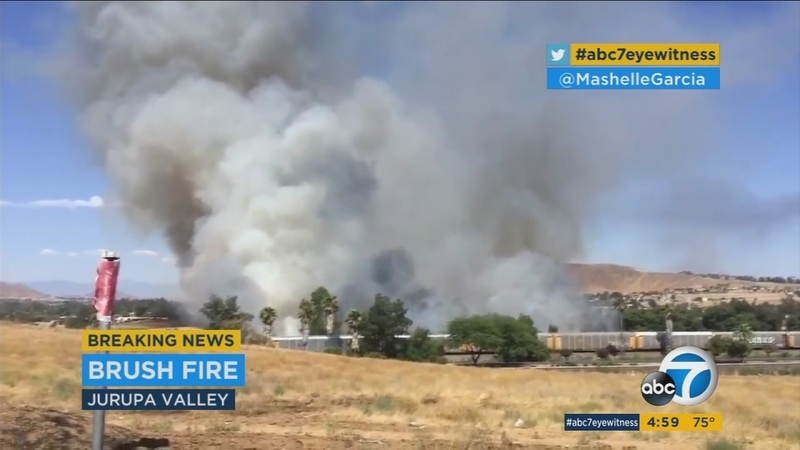 JURUPA, Calif. (KABC) -- Separate brush fires were burning about 20 miles apart in Riverside County in the areas of Jurupa Valley and Lake Mathews.

The fires were burning on a hot, dry July 4 day that saw multiple brush fires erupting in different areas of Southern California.

In the Jurupa Valley area, a fast-growing brush fire burned through about 40 acres Tuesday and was listed at 50 percent containment by early evening, officials said.

The fire was first reported around 3:20 p.m. in the area of Van Buren Boulevard and Jurupa Road. It was initially reported at 20 acres, but the estimate jumped to 30-35 within an hour.

Fire officials say one barn-like structure has already been destroyed by flames.

No official evacuations have been ordered, but people were seen packing up animals and leaving the area. One resident said his goats may have been killed in the flames.

About 20 miles to the south, a separate blaze was also burning in grass just southwest of Lake Mathews, in the area of Tin Mine Road and La Sierra Avenue.

A brush fire had burned about 50 acres southwest of Lake Mathews in Riverside County on Tuesday, July 4, 2017.

Named the Eagle Fire, the blaze near the lake burned about 200 acres before firefighters were able to stop its forward progress.