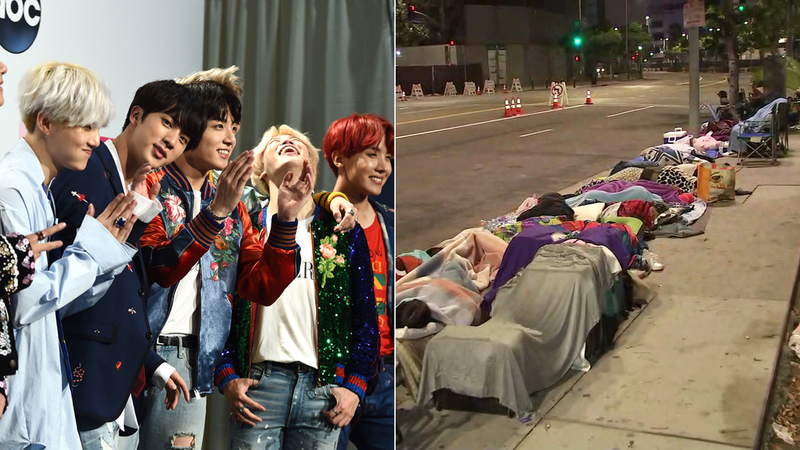 BTS fans camp outside Staples Center ahead of concert

LOS ANGELES (KABC) -- International K-pop group BTS is kicking off their North American tour Wednesday night, and fans are lined up bright and early outside of Staples Center for night one.

Wednesday's concert will be the first of four sold-out performances at the downtown Los Angeles venue.

Fans, also known as the "BTS Army," with general admission floor tickets have been lined up for days down the street and around the block for the much-anticipated kick-off. The boy band tweeted about the fans seen on ABC7's live report and asked them to "wait a little bit longer."

BTS is a seven-member K-pop group from South Korea that has morphed into a global phenomenon.

The popular South Korean boy band BTS is now the first Korean group to make it to No. 1 on the "Billboard" top 200.

The band's latest single, "Idol," knocked Taylor Swift off the record books to earn the highest 24-hour music video debut in YouTube history, with more than 45 million views on the first day.

"Something about them just kind of spoke to me," said fan Daniela Rios. "It's just something about their music and the message they like to put out that is really encouraging for people my age and people that are younger than me."

In 2017, BTS was the most tweeted about celebrity, with more than 5 million likes or retweets -- that's more than President Donald Trump and Justin Bieber combined.