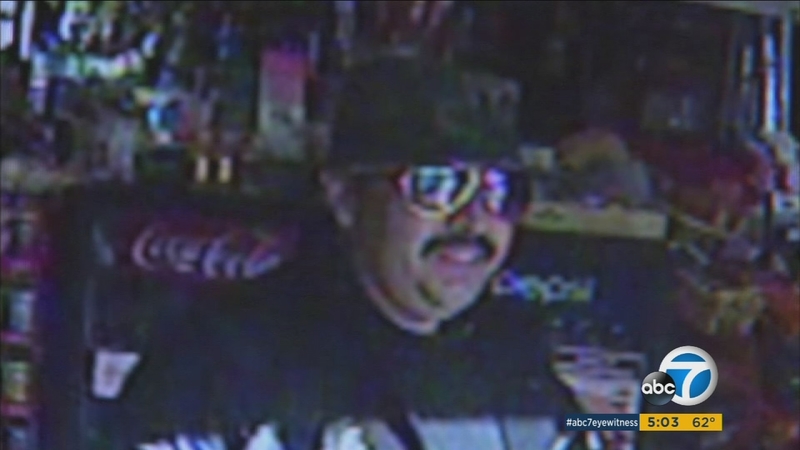 BUENA PARK, Calif. (KABC) -- Authorities are searching for a man wanted in an armed robbery at a Buena Park gas station that was caught on camera. He is also suspected in other robberies.

Surveillance video shows the man walking up to the cashier at a Mobil gas station. The manager says he started by pulling out a $20 bill and asking for change.

"The cashier instructed him that we do not open the drawer just because you need change. You have to make a purchase however small," Cyril Wallace said.

The man walked around the store, came back to the counter and asked for some of the candy on display. As the cashier went to ring it up, the man pulled out a gun and told the cashier to empty the register.

"When she didn't give him the money, it's at this point that he decided to come around the cash register booth, approach the register," Wallace said.

Another camera shows him reaching into the drawer and grabbing all the cash. But he didn't stop there.

"Continued to ask her for more money, the keys to the safe, he wanted access to the video, and at this point she said that she had none of that," Wallace said.

That's when the video shows a woman walking up to the register trying to help.

"One of our regular customers entered the store, and the cashier was trying to whisper to tell her 'could you please call 911, call 911,'" Wallace said.

The woman quickly walked out, but the man followed. The video caught him smiling as he left. He got into a black four-door sedan with tinted windows.

Buena Park police say this man might be linked to several gas station robberies in Los Angeles County. Police hope someone recognizes him and speaks up. So does the gas station manager.

"We have 32 cameras, and we have very good images of you, so it's just a matter of time," Wallace said.