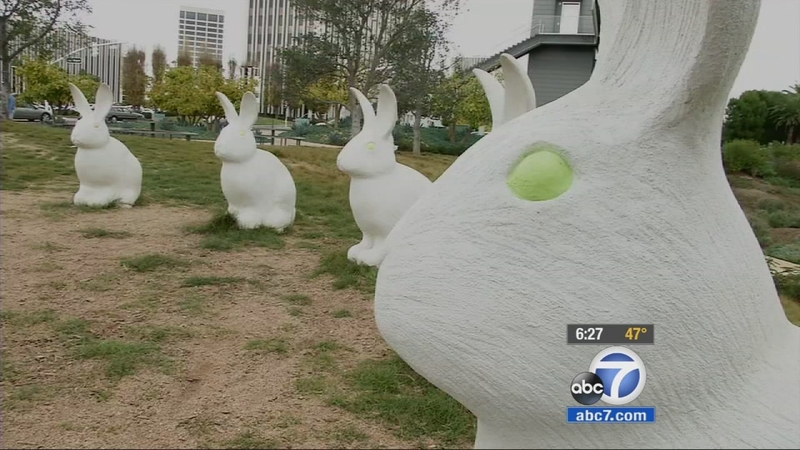 NEWPORT BEACH, Calif. (KABC) -- There is a lot of different types of art at the Newport Beach Civic Center, but there's one exhibit that is getting attention.

Nicknamed "Bunnyhenge" by residents, there is a tight circle comprising 14 concrete rabbit statues. Children run around, climb and play on the bunnies, but parents wonder where the statues come from.

"It reminds me of 'Alice in Wonderland.' So it's like a cool, kind of crazy place. All the art sculptures are different - nothing is the same," said Tustin resident Elaine Johnson.

But not everyone is fond of the rabbit statues. Newly elected city council member, Scott Peotter, posted a video during his campaign that showed one of the statues being blown up.

Peotter admits he didn't actually blow up one of the statues, but said he is serious about the message behind the campaign commercial.

"What we're really doing is trying to blow up this establishment and show how we're going to come in and bring new thoughts," he said.

Peotter said the last group of council members made a poor decision to spend $221,000 of the city's money on the rabbit statues.

Former mayor and current Councilman Keith Curry said he supports keeping them because they were put there by the Civic Center's architect.

It's not just the circle of 14 bunnies that is under scrutiny, there are also two 8-foot tall statues in other parts of the park.

"Let's replace it with playground equipment the kids can actually use. Because a lot of people sit there and say 'Oh, my kids just want to come to bunny park and play on the bunnies.' well, we'll give them a better park," Poetter said.

He wants to put the rabbits up for sale so the city can get its money back, but the council will decide when it's back in session next month.