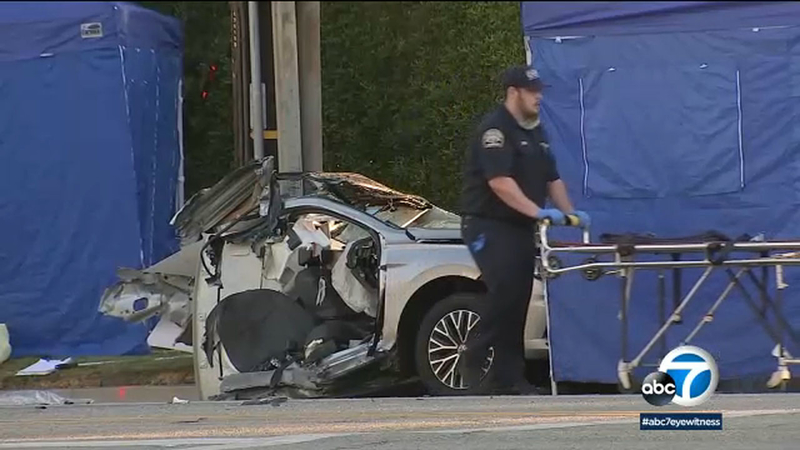 Neighbors say the stretch of Glenoaks Boulevard where the horrific crash occurred is well known for racing. They weren't surprised to hear the sounds of cars speeding down the street just before midnight.

More shocking, however, were the jarring sounds that followed: A high-speed collision into an innocent car that happened to be in the area, sending three bodies flying into the street and into the yard of a neighbor's home.

Police say the victims who died were all passengers of a Volkswagen that made a left turn into the path of the two racing vehicles. All were in their teens or early 20s.

Neighbor Mike Weston said the sound was "like a race track. (Then they) lost control. I was like, uh oh here goes the street racers again. Then the impact. Bang. Smash."

Added Hef Fonseca of Burbank: "This street is like a freeway. And people don't care."

Three cars - the two that were racing plus the Volkswagen - were involved in the violent collision, which was reported about 11:50 p.m. Tuesday near the intersection of Andover Drive and Glenoaks, according to the Burbank Police Department.

Police say a Kia and a Mercedes-Benz were racing northbound on Glenoaks. The Volkswagen, heading southbound, was trying to make a left turn onto eastbound Andover Drive when the crash occurred.

The force of the impact sheared the Volkswagen in half and left at least one vehicle on fire at the scene. Three occupants of the VW were pronounced dead at the scene.

The coroner's office has identified the three people who died as: Cerain Anthony Raekwon Baker, 21, of Pasadena; Jaiden Kishon Johnson, 20, of Burbank; and Natalee Asal Moghaddam, 19, of Calabasas.

A fourth occupant of the Volkswagen was transported to a hospital with serious injuries.

The driver of the Kia that was involved in the racing was also seriously injured and was transported to a hospital.

An update on the condition of the survivors was not immediately available.

The black Mercedes-Benz remained at the scene after the crash. The two people inside the Mercedes were not injured. Investigators interviewed them at the scene and released them.

Police say because street racing was involved, charges are possible pending the investigation.

"It's a very sad, sad day for multiple families," said Sgt. Emil Brimway with Burbank PD. "We have three lost individuals who have passed, for something that was absolutely preventable. Unnecessary."

Anyone who may have witnessed the collision or has any information is asked to contact the Burbank Police Traffic Bureau at (818) 238-3100.