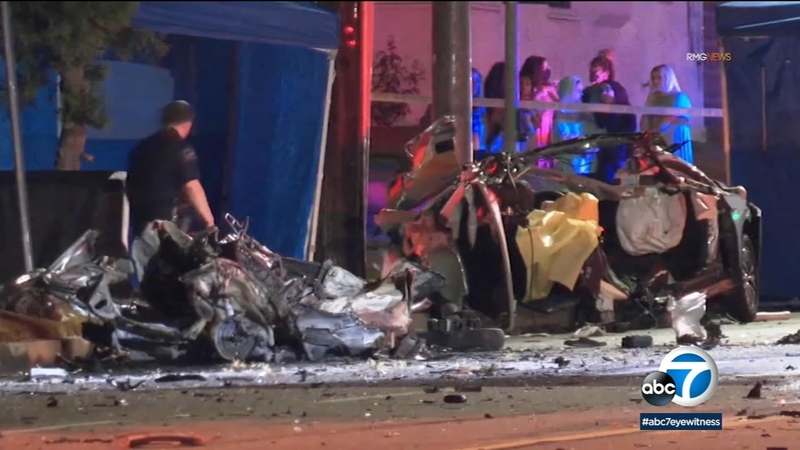 The victims from the violent multi-vehicle crash that happened Aug. 3 have been identified as Jaiden Kishon Johnson, 20, of Burbank; Natalee Asal Moghaddam, 19, of Calabasas; and Cerain Baker, 21, the son of accomplished comedian Tony Baker.

A fourth victim was also hospitalized with critical injuries, according to the Burbank Police Department.

The driver of a gray Kia involved in the crash has been charged with three counts of murder and one count of reckless driving, police said. Hamlet Arseni Aghajanyan, a 19-year-old resident of Burbank, was arrested Thursday and is being held in lieu of $6,000,000 bond.

Friends and loved ones of Cerain Baker, who was among three innocent victims killed in a violent crash caused by street racing, gathered outside Burbank City Hall to demand arrests in the case.

Another driver of a Mercedes-Benz, only identified as a 17-year-old, was also taken into custody and is being detained at a juvenile detention facility on three counts of murder and one count of reckless driving, pending review of the case by the L.A. County District Attorney's Office, police said.

Police say the victims who died were all passengers of a Volkswagen that made a left turn into the path of the two racing vehicles.

Three cars - the two that were racing plus the Volkswagen - were involved in the violent collision, which was reported near the intersection of Andover Drive and Glenoaks, according to the Burbank Police Department.

Police say a Kia and a Mercedes-Benz were racing northbound on Glenoaks. The Volkswagen, heading southbound, was trying to make a left turn onto eastbound Andover Drive when the crash occurred.

The force of the impact sheared the Volkswagen in half and left at least one vehicle on fire at the scene. Three occupants of the VW were pronounced dead at the scene.