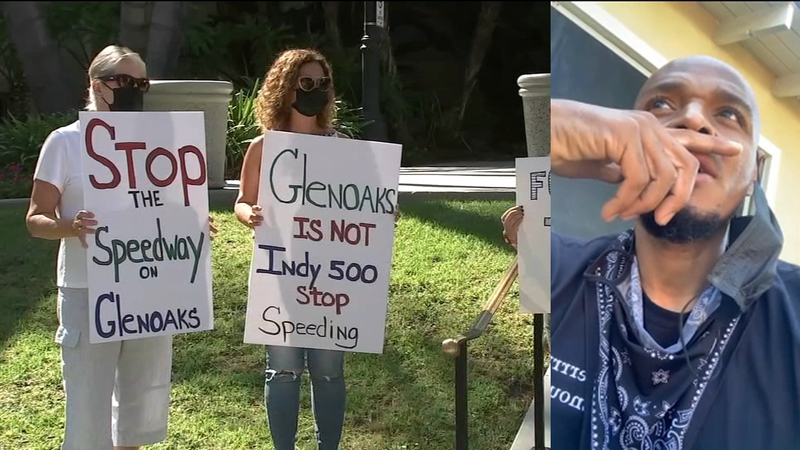 BURBANK, Calif. (KABC) -- Anguished friends and loved ones of 21-year-old Cerain Baker, who was among three innocent victims killed in a violent crash caused by street racing, gathered outside Burbank City Hall on Tuesday to demand arrests in the case.

The demonstrators gathered to protest excessive speeding and negligent driving in the city.

Last week, three young adults were killed in a violent multi-vehicle crash that left their car split in half. Police said the collision was caused by two other vehicles that were street racing at the time.

One of the victims -- 21-year-old Cerain Baker, was featured often in videos produced by his father, well-known comedian Tony Baker.

On Tuesday, the elder Baker posted a video to his Instagram thanking fans for their support in the aftermath of his son's death.

Comedian Tony Baker, whose 21-year-old son was among the three victims killed in the crash, spoke out for the first time since the incident and thanked supporters.

"The outpouring of love has covered the funeral costs in 30 minutes," Baker said. "Now we're just trying to get covered family travel expenses and all that.

"But my village -- y'all are absolutely ..." he said, his voice trailing off as he was overcome with emotion.

"The Department will continue to conduct targeted enforcement operations as it relates to speeding, reckless driving, exhibition of speed, and/or illegal street racing," the statement said. "The Department will also continue to educate the Community on the dangers of such reckless acts through our social media platforms and direct contact with Community Members."
No arrests or citations have been announced in the case.

The department said it "will take time to complete a thorough, detailed, and meticulous investigation," adding that once it is complete, police will submit their findings to the Los Angeles County district attorney's office.