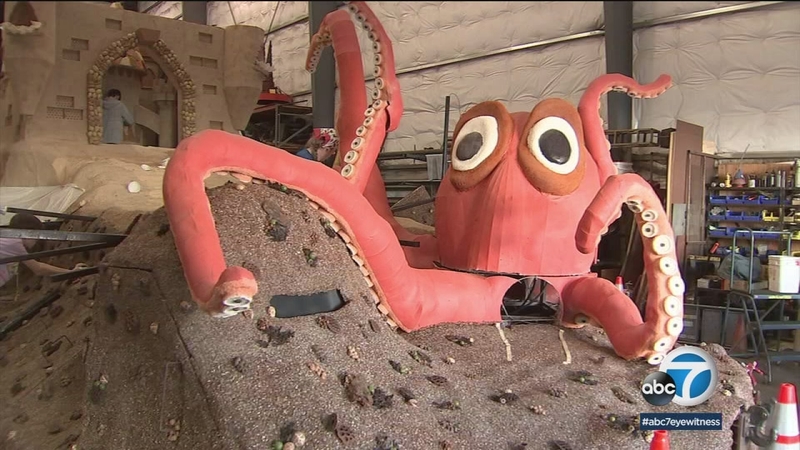 BURBANK, Calif. (KABC) -- Local cities are taking matters into their own hands as they work tirelessly to design and build their own beautiful floats for the 129th Rose Parade. It's all thanks to money raised by foundations to cover the costs.

Fourteen-year-old Catherine Glandon sprinkled split peas on a turtle. It'll join a giant octopus and other marine life on the float she designed for the city of Burbank's entry.

This year's Rose Parade theme is "Making a Difference."

"It's sea creatures helping clean up the beach, and I came up with the idea in my English class while we were studying how California recycles, so I like the idea for 'Making a Difference,'" Glandon said.

In South Pasadena, the sides of a car were being filled in, one bean at a time.

The city raised $100,000 to cover the cost of its float, which is honoring the Booster Club.

Lisa and George Fesperman are volunteers from Georgia. They wanted to cross float decorating off their bucket list.

"It's one of those dreams I've always had -- to get to be here and be a part of the process and see how this really works," Lisa said.

The La Canada-Flintridge Tournament of Roses also raised the funds needed to build their city's float. Panda bears will be the main attraction.

Ella Jacobs, 12, created the float, and she and other volunteers were doing as much work as they could on Friday because it's too warm to put flowers on the float.

"Some of them are going to be in water, but we still don't want them to die because some of the flowers are really fragile and need water," Jacobs said.