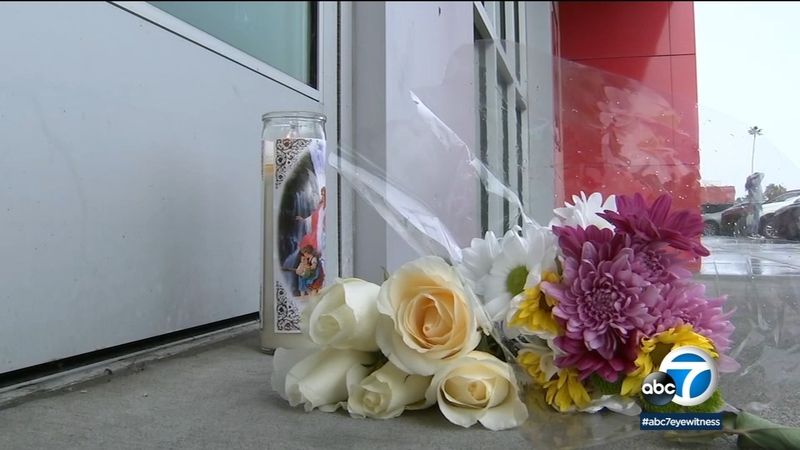 The newspaper report said Daniel Elena Lopez was also high on marijuana at the time of the attack.

Police shot and killed the 24-year-old suspect, but one of the bullets inadvertently pierced a dressing-room wall behind him, also killing 14-year-old Valentina Orellana Peralta.

The teenager was shopping for Christmas clothes at the time of the shooting. She died in her mother's arms.

Before the shooting, surveillance video showed the suspect attacking two women elsewhere in the store, including one who fell to the floor before he dragged her by her feet through the aisles as she tried to crawl away.

Multiple people including store employees called police to report a man striking customers with a bike lock. One caller told a 911 dispatcher that the man had a gun. No firearm - only the bike lock - was recovered at the scene.
EMBED More News Videos

The Los Angeles Police Department has released body camera footage of a shooting that killed a 14-year-old girl at a Burlington store in North Hollywood.

The early surveillance footage showed a man carrying a bicycle up the store's escalator to the second floor, where he wandered around, seemingly disoriented, clutching a cable-style bike lock. At times he stood motionless, staring into the distance.

The footage later showed the man on the down escalator attacking a woman, who managed to escape his grip and run out of the store.

The man then left the store for a minute and a half, police said. After he returned, according to the video, he repeatedly beat a woman with a bike lock while she cowered on the floor. As she tried to escape, he dragged her through the aisle toward the dressing rooms.

In bodycam video, armed officers entered the store and approached the suspect. One held a rifle and pushed to the front of the pack as the officers went through the store in formation.

Other officers repeatedly said "slow down" and "slow it down" as the officer with the rifle moves forward.

"She's bleeding!" an officer shouted as they encountered the victim, crawling on the blood-stained floor. The suspect was on the other side of the aisle.

"Hold up! Hold up!" another officer screamed just before three shots rang out.

The Times reported that Elena Lopez's previous criminal history included convictions for car theft, carrying a loaded gun in public and carrying a gun as a felon.