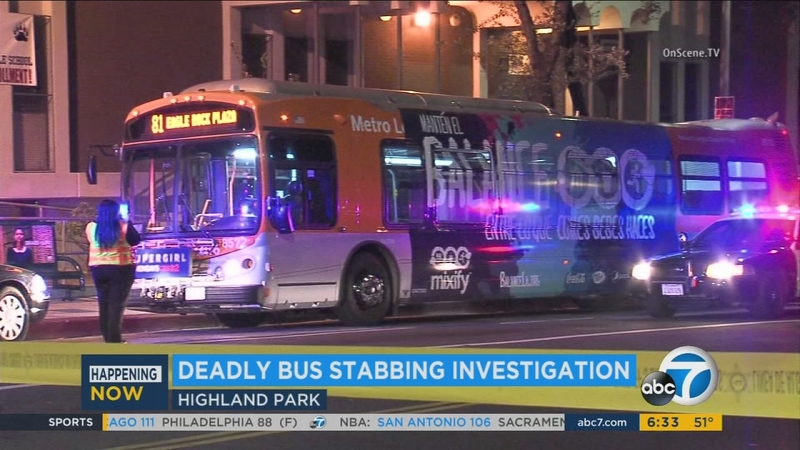 HIGHLAND PARK, LOS ANGELES (KABC) -- A man was stabbed to death in the back of a Metro bus in Highland Park Monday night, according to the Los Angeles County Sheriff's Department.

The stabbing was reported near Meridian and N. Figueroa streets shortly before 11 p.m.

Three male suspects entered Metro bus line 81 at 57th Avenue and Figueroa Street and walked to the back of the bus where they began arguing with the victim, authorities said.

As the situation escalated, one of the suspects wearing a dark-hooded sweatshirt pulled out a knife and stabbed the man in the chest.

There were about 10 passengers on the bus at the time of the stabbing.

When the bus stopped near Meridian and N. Figueroa streets, the three suspects, described as three men between 25 and 35 years old, immediately exited and fled westbound on foot.

The victim was pronounced dead on the bus. He was described as a man in his 30s.

Detectives don't believe the victim knew the suspects but say they will be reviewing the bus' video surveillance footage.

Metro spokesperon Jose Ubaldo said there's about 7-9 cameras inside and outside the bus.

The investigation is ongoing. Anyone with information about this incident is encouraged to contact the Los Angeles County Sheriff's Department's Homicide Bureau at (323) 890-5500.