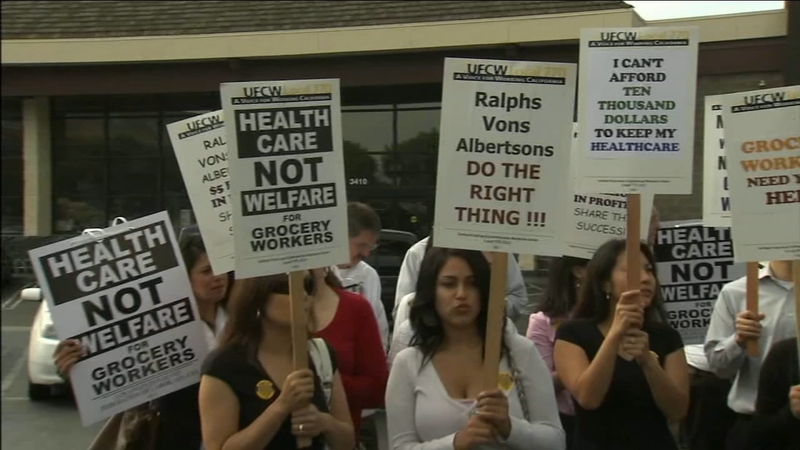 LOS ANGELES (KABC) -- Members of the United Food and Commercial Workers union's Local 770 chapter on Wednesday voted to authorize a strike at Ralphs, Vons and Albertsons stores across the Southland. The vote came after contract negotiations stalled.

The union, which has been without a contract since March, is demanding better wages and improved benefits.

Wednesday's vote does not necessarily mean that employees will immediately walk off the job, but the move does allow union leaders to call a strike at any time.

"I believe that the company can do something about it," said Vons employee Pablo Novelo. "We don't want to be going on strike. I don't think anybody wants to. But if we have to, that's what the union is about - to be 100 percent, to be together, to work as a team.

"Like I always say, if we work as a team we're going to win," Novelo added.

According to the UFCW, 96 percent of Local 770's members voted in favor of the authorization. A spokesperson for the union said 17 bargaining sessions have been held but none resulted in a deal.

The grocery chains called the strike authorization vote "premature," and said they were working with the unions and employees on a fair agreement.

"It is business as usual in all Ralphs stores," that company said in a statement. "We'll continue to negotiate in good faith for an agreement that is fair for our associates as well as our company."