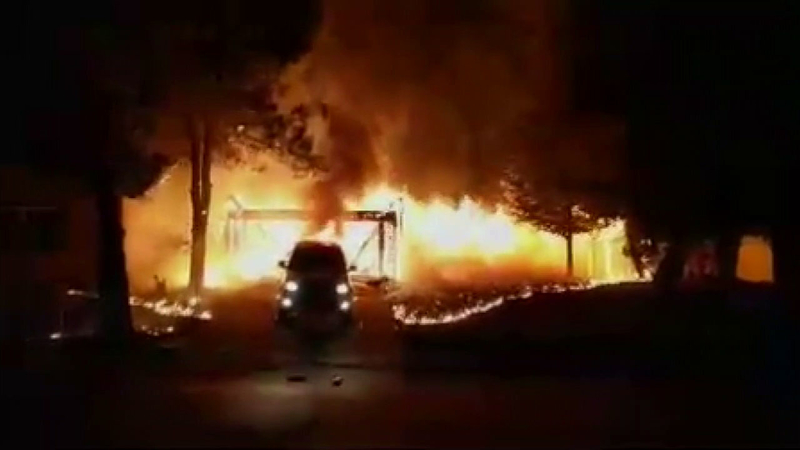 Multiple canisters of butane - one of the main chemicals used to extract THC from marijuana to produce honey oil - were seen on the ground outside the home in the 33000 block of East Harvest Way.

Sheriff's investigators say they also found a marijuana grow in the backyard.

Neighbors reported seeing multiple fireballs, seeing canisters fly around the area and hearing an explosion that felt like an earthquake.

"That truck blew up twice," said Enrique Mata, who lives next door to the home. "Those canisters were just shooting all over the place. We were standing way over there and you could still feel the fire."

The fire destroyed several rooms in Mata's home shortly after he and his family evacuated.

It took 28 firefighters to put out the blaze, which was reported around 4 a.m.

At least one person was airlifted to Arrowhead Regional Medical Center's burn unit with burns to 40 percent of his body. He was listed in stable condition.

The explosion came less than a day after the Riverside County District Attorney's Office launched a new public-information campaign to warn about the dangers of honey oil labs. The campaign's public-service announcements feature a Moreno Valley couple who suffered severe burns after trying to make honey oil in a Palm Springs motel.