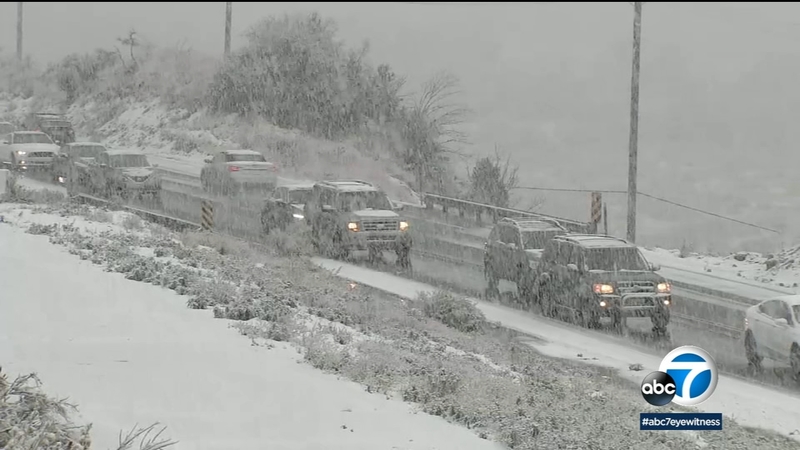 SB I-15 at Cajon Pass reopens as storm continues

CAJON PASS (KABC) -- The southbound 15 Freeway at the Cajon Pass was reopened after it was temporarily closed due to traffic accidents amid snow in the area, Caltrans said.

Caltrans shut down the lanes near Oak Hill Road shortly before 8:30 p.m. Thursday. Lanes were later opened at approximately 11:45 p.m.

Traffic slowed to a crawl on the Cajon Pass due to the second round of rain and snow pummeling Southern California.

The Thanksgiving storm caused a traffic nightmare for drivers in the area. Earlier in the day, the 15 through the Cajon Pass was backed up for miles in both directions, with even side streets jammed.

At one point during a backup, tempers seemed to flare as people were trying to get to their Thanksgiving Day destination.

"Everyone was beeping, none of the cars were moving," said one person stuck in the congestion. "It was frustrating. People were getting out of their cars and yelling. It was crazy."

A quick look at the top of the Cajon Pass. pic.twitter.com/32A4XQDe5G

Just before noon, the 15 Freeway on the Cajon Summit seemed deserted as an armada of Caltrans plows were working on the freeway, trying to keep snow off the road.