The plans allow for the units to be easily assembled by the occupants at a fraction of the cost for typical transitional housing.
KABC
By Phillip Palmer 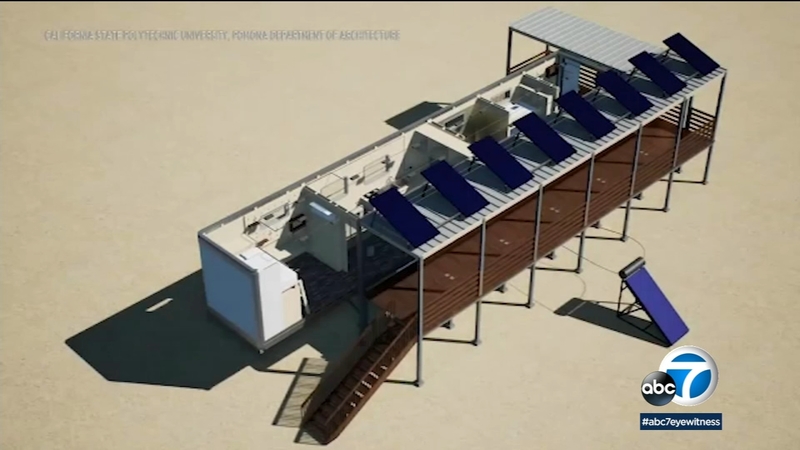 POMONA, Calif. (KABC) -- Efforts to house the homeless have exploded over the last year. From Project Roomkey to tiny homes, help is available.

But a group of architectural students at California State Polytechnic University, Pomona believe their idea should go from the drawing board to the real world.

"We want to give these people a purpose and a focus when we bring them to this site where they will be living. And that will be by giving them the opportunity to be part of the community that will actually be involved in building these trailers," said Maribel Ruiz, a fourth year architectural student.

Over the past several years, Dr. Behnam Samareh's fourth year architectural students worked to create a process for the production of mobile dwellings, using the existing structure of a shipping trailer.

"Every semester, the work of the previous semester is basically pushed further. So it's just moving forward along and we are at a place right now that basically everything about that concept is fully developed," Samareh said.

"We have created like a whole manual, like step-by-step guide, of how to fabricate each component of it," Ruiz added.

Each unit could be for a single-family or two separate single units. The detailed plans allow for the units to be easily assembled by the occupants at a cost of roughly $35,000, which is a fraction of the cost for typical transitional housing.

But beyond the housing, the focus is a community.

"The idea for us has been to create that infrastructure around it," Samareh said. "Not just given the houses, but created that environment around that gives them employment, gives them functionality, gives them purpose, gives them hope."

A critical element is the use of land owned by the government. In this case, it's Bureau of Land Management land near the Salton Sea, which was originally developed as a trailer park, complete with infrastructure. But now, it sits vacant.

Similar sites could be found in virtually every city in the country.

"This is land that belongs to you. The only reason it's there, and it's unused, because there's no one who's offering to use it. So if you propose the purpose for these lands, and your purpose was meaningful, and benefited the whole entire community, there is no reason why anyone would say no," believes Dr. Samareh.

Since the community is mobile, if the land is needed for a different project, the trailers could move elsewhere.

The 30 students remotely taking Dr. Samareh's class this semester have put the finishing touches on the project, which is now ready to be implemented.

The only piece missing is a city or private organization willing to fund it.

Los Angeles business owners and residents hope a new plan from Gov. Gavin Newsom can reduce the growing number of homeless encampments across the city.

"I personally think we cannot continue relying on government officials to solve this problem entirely. But I think that we can work together with them to find new solutions," Ruiz said