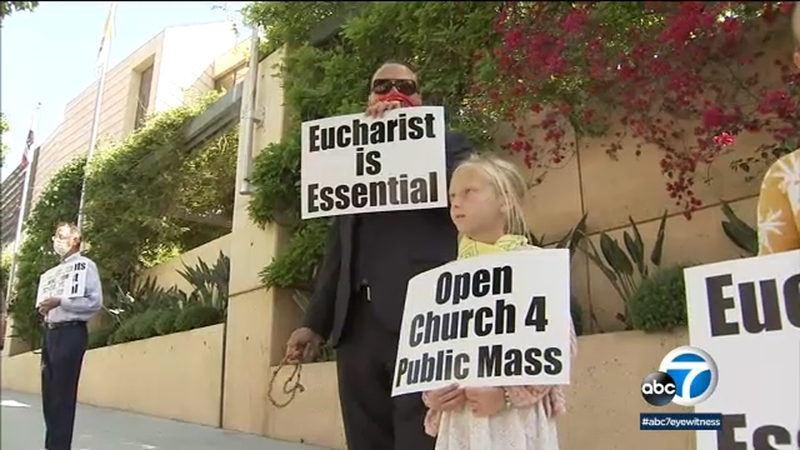 The state of California released new guidelines Monday to allow for the reopening of churches and other places of worship for in-person services.

The new guidelines include:

Places of worship are also encouraged by state guidelines to continue offering remote and online services. They should also meet outside to reduce the risk of spreading COVID-19 wherever possible.

The guidelines also ask places of worship to "strongly consider discontinuing singing, group recitation, and other practices and performances where there is increased likelihood for transmission from contaminated exhaled droplets."

Concerts, holiday events and other especially large gatherings should remain canceled for the time being.

"Churches are among the most dangerous. I was talking to my rabbi and a bishop I'm very close to and they said even if they opened up tomorrow we would not open up. It is not responsible," said Los Angeles Mayor Eric Garcetti.

On Friday, a federal appeals court upheld the ban on church gatherings. It was part of lawsuit filed two weeks by South Bay United Pentecostal Church in San Diego. The attorney representing the church spoke with ABC7 on Monday regarding the new guidelines.

"We think that these new guidelines are still arbitrary and unconstitutional. They're placing limits on houses of worship that they're not placing on, for example, factories or offices," said attorney Paul Jonna.

Todd Smith is from the Crossroads Community Church in Valencia.

In Los Angeles worshipers gathered outside the Cathedral of Our Lady of the Angels for a prayer service and rally on Sunday. They are hoping to convince local leaders to open up churches as a part of phase 2.

"My religion is not being respected. Abortion clinics are open right now, liquor stores," said Sara Halpin of Pasadena.

Meanwhile, the governor is also working on new guidelines for the movie and TV industry to reopen.

"Maybe quarantine for 14 days and then you get onto a set for a series at a time, but we need to get people back to work. This next month or two will be make or break for this economy," said Mayor Garcetti.

"They need to treat houses of worship similarly as other entities, other organizations and that's not being done."

Officials announced they will update a health order to now allow all retailers to open in Los Angeles County. The announcement comes after officials said in-store shopping will be allowed throughout the state with approval from county health officials.