Restaurant owners defying the regional stay-at-home order to shut down in-person dining say they'll go out of business if they follow the new rules.
KABC
By Rob McMillan and Veronica Miracle 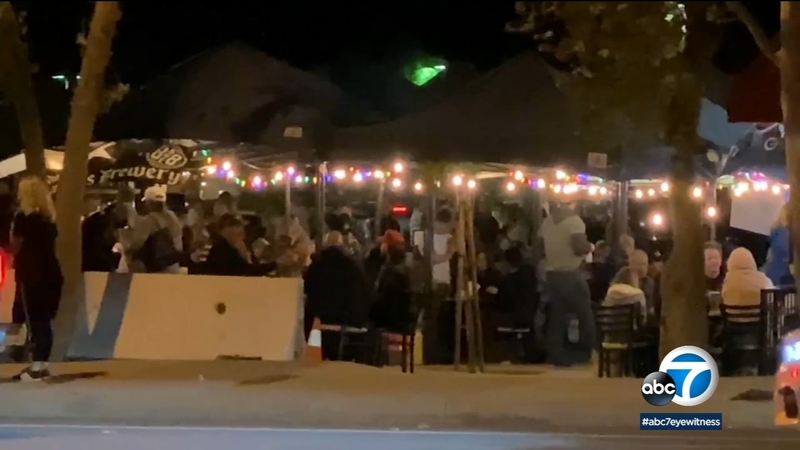 BEAUMONT, Calif. (KABC) -- Southern California restaurants are forced again to put a halt to in-person dining, but several are defying the region's state orders, with owners saying they'll go out of business if they follow the new rules.

Diego Rose, owner of Marla's Cocina and Catina in Beaumont, says his restaurant will be open despite a regional stay-at-home order that limits restaurants to only takeout and delivery.

"It's going to be business as usual for us, we've always been afforded the luxury to have the space to socially distance people," Rose says.

Rose says they try to sit most people in a part of the restaurant with roll-up doors, that he calls an outdoor patio.

Southern California restaurants are forced again to put a halt to in-person dining, but several are defying the region's state orders.

He says if other businesses can stay open indoors, why should restaurants be told they can't open outdoors?

"A lot of our mom and pop shops have spent thousands and thousands of dollars to move their inside to outside, and have three walls and a tent, have people outside, and as you can tell in this wind, they've lost it all," Rose says. "They're losing around every turn, and it's trying to be justified with some kind of science, and yet, I don't see any of that science."

One restaurant in Corona is even serving people indoors.

While some of the larger chains and corporations are following the orders, many of the mom and pop shops say going to takeout only would put them out of business.

As California hospitals struggle amid a surge in coronavirus cases, state officials imposed a new stay home order on more than 33 million people.

"It's a day by day thing, but we're staying open," says David Foldes, owner of Cronies Sports Grill in Agoura Hills. "We've gone past the point of no return."

"We are outdoors, and it is safe outdoors, according to all science, and until it's proven different, we're staying open," Foldes says.

He's already gotten thousands of dollars in fines from L.A. County. There was a rally at the restaurant Monday evening. L.A. County sheriff's deputies were seen driving by the establishment as it served patrons indoors and outdoors. Hundreds of people were dining there.

Those who showed up protested the order and made a political statement as some waived pro-Donald Trump flags.

Capt. Sal Becerra, who oversees the Lost Hills Sheriff's Station, said on Facebook he would not force businesses to close and asks people wear a mask.

"Please know that I will not force any business to shut their doors. Nor will I enforce a Health Order that curtails a business," he wrote. "Every business is essential right now. Every job is important."