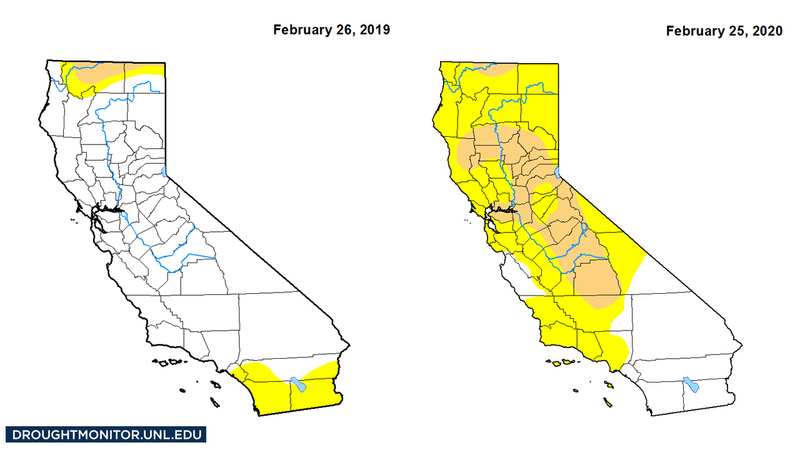 A dry winter across California has left the state abnormally parched, prompting officials to brace for the possibility of a more intense wildfire season.

Drought has expanded from just under 10% last week to nearly a quarter of the state, mainly in central California, the heart of the state's agricultural sector, according to a U.S. Drought Monitor map made public Thursday. The map released weekly shows 70% of the state is now abnormally dry.

Additionally, the month of February is shaping up to be the driest February on record for much of the state.

A hot spell that settled over Southern California this week was expected to reach a climax Thursday, with highs in several Southland communities nearing or reaching record territory.
EMBED More News Videos

This week's hot spell will reach a climax Thursday, with highs in several Southland communities nearing or reaching record territory.

Sierra Littlefield, a National Weather Service meteorologist in Sacramento, said there is a strong chance the state's capital will see a completely dry February - something that has not happened in recorded history.

Downtown San Francisco is on its way to its first rain-free February since 1864, according to the weather service.

The lack of rain this year comes after a wet 2019 that capped mountains with snow, delivering water to reservoirs and helping to boost lush vegetation that can quickly turn into fuel for wildfires during dry, windy conditions.

About 75% of California's annual precipitation typically occurs from December through February, mostly from what's known as atmospheric rivers - long plumes of moisture originating far out in the Pacific Ocean.
But a high-pressure system parked in the Pacific has blocked storms from reaching California and instead steered them to the Pacific Northwest.

"California and parts of the Southwest dried out while the Northwest observed surplus precipitation," wrote NOAA meteorologist David Miskus, who issued this week's Drought Monitor report.

In another sign of California's dry conditions, state officials on Thursday conducted a survey of the Sierra Nevada snowpack and found it was 47% of the March average at the Sierra's Phillips Station.

The first reading on Jan. 2, found the snowpack was 97% of the January average. But dry conditions since then have hurt the snowpack, which supplies about 30% of California's water.

"February rain and snow were quite disappointing," said Sean de Guzman, chief of the department's snow surveys and water supply forecasting section. "We'll most likely end this water year below average. We just don't know how far below."