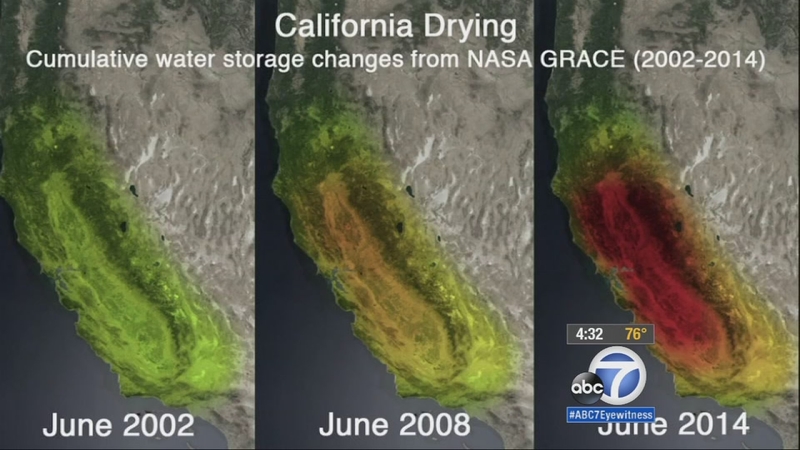 LOS ANGELES (KABC) -- As California grapples with a historic drought, new research points to a future where a lack of rain and snowpack are the new normal. It's a future where California becomes a much more arid state, and where the way of life could change dramatically.

"The picture that we get, it's not a good one. It points to prolonged drought in the future for California, and really for a lot of the dry parts of the world," said NASA hydrologist Jay Famiglietti.

Famiglietti is the senior water scientist at NASA's Jet Propulsion Laboratory in Pasadena. Unlike other climate research, Famiglietti studied satellite imagery in order to compile evidence of a California that could look a lot more like Arizona.

"I think it tells us perhaps that the situation is a little worse than is generally understood," said Famiglietti.

That would mean a major shift in how we go about our daily lives.

"For average consumers, you'll certainly see, obviously, increases in your water bill, but also increases in any of the products that require heavy watering, including for example the food that you get at the grocery store," said Sean D'Evelyn, an economist at Loyola Marymount University.

D'Evelyn says California will never run out of water, but it will run out of cheap water.

"I think that that will be especially tough for our low-income families because they're going to be seeing a much larger percentage of their household budget having to go to pay for necessities," said D'Evelyn.

For many, that will mean shorter showers. And since outdoor water usage accounts for 50 percent of California's water consumption, property owners will have to make changes.

That's not to say that the lush landscaping that we have come to enjoy will disappear altogether: we just won't see very much of it, because fewer people will be able to afford it.

"I think that the days of the lush green lawns, I think those days are over," said Famiglietti.

Desalination plants could start to play a larger role in our future, but it won't come cheap.

And so while no one is predicting a collapse of California, the experts say conservation won't be suggested -- it will become mandated.