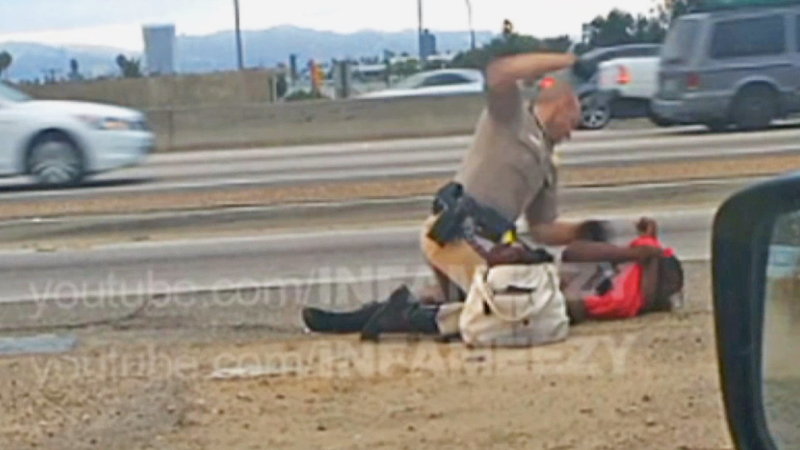 LOS ANGELES (KABC) -- It's a story you saw first on Eyewitness News: A violent beating caught on video during an arrest by a CHP officer. Now the community wants answers. And for the first time, we're hearing from the California Highway Patrol.

A witness who was in a car nearby noticed the commotion and recorded the video on Tuesday. He says the woman was walking on the 10 Freeway near the La Brea onramp when an officer tackled her and began punching.

The CHP held a news conference at its L.A. headquarters Friday afternoon.

Community activists demand a federal civil rights probe and answers about how CHP officers are trained in handling individuals who may have mental illness.

"We have almost assuredly a homeless woman, someone no telling what her state of mind is, obviously if you are near a freeway I think it's a fair assumption that something's wrong," said Earl Ofari Hutchinson, L.A. Urban Policy Round Table founder and ost.

"If she is in fact homeless then obviously there is some concern for her stability," said Lita Herron, Youth Advocacy Coalition president.

"What we understand to have occurred at this point was that she started to walk down the on-ramp and then turned around and came back up and crossed lanes of traffic, endangering herself and the motoring public. There was heavy traffic at that time," said CHP Assistant Chief Chris O'Quinn. "People aren't anticipating a citizen being out there on the freeway walking."

The cellphone video was shot by a motorist on Tuesday. The take-down happened along the eastbound 10 Freeway at La Brea Avenue.

A woman who lives near the on-ramp says as many as 20 people had been camping out in the ramp area. A month ago neighbors got Caltrans to cut the vegetation, fearing a fire hazard.

"If they smoke crack and they drop something down, it will light up and we will all be in danger," said Mardi Roque, part of the Friends of West Adams Association.

According to the California penal code, peace officers are allowed to use their hands with force to effect an arrest when the individual resists and poses a threat to himself or others. The question is what is reasonable.

The victim was treated for injuries at County USC Hospital and then transferred to another facility.

"And this is one of those circumstances where we will be looking at what transpired, and why it occurred," said O'Quinn.

According to the arrest report, the woman was not injured. She was held for a 72-hour psychiatric evaluation.

The CHP stresses that walking on a freeway is a lethal hazard.

The CHP officer is on administrative leave.