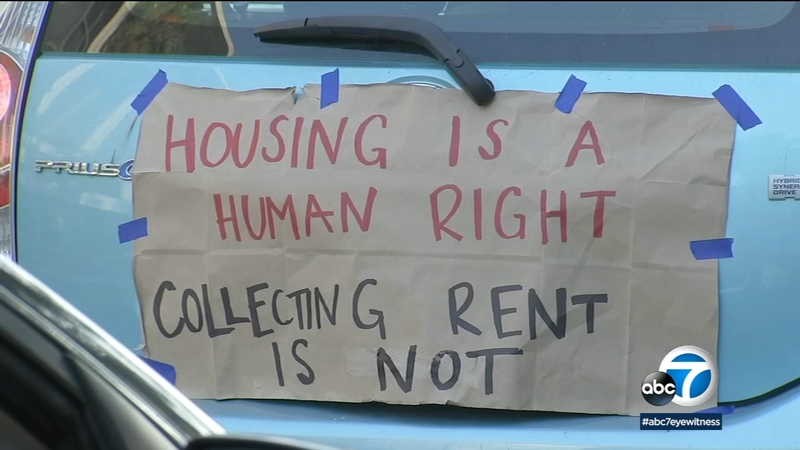 The protesters chanted slogans and held rope to block at least one entrance to the Stanley Mosk Courthouse on Hill Street in a symbolic effort to "shut down" the courthouse as a show of opposition to eviction hearings.

The protesters are demanding that Gov. Gavin Newsom and the state legislature pass a bill that would prohibit landlords from evicting tenants who can't pay rent due to COVID-19.

Assembly Bill 1436 would also provide relief for homeowners and some landlords.

A $100 million rent relief fund is on its way to help thousands of low-income families in Los Angeles County.

Renters like Benson, who only speaks Cantonese, told Eyewitness News through a translator that without the passage of the bill, he worries about becoming homeless.

"Right now, they're just relying on social security to get by. This bill will help people like Benson because, first of all, they cannot afford to repay the rent that's owed due to loss of income during COVID," said Annie Shaw with the Chinatown Community for Equitable Development.

Shaw also said California's only eviction moratorium ends Sept. 1 so she, like other advocates, want the governor to replace that rule with one that would stop all evictions from moving forward.

California will resume eviction and foreclosure proceedings on Sept. 2, stoking fears of a wave of evictions during the coronavirus pandemic unless the governor and state Legislature can agree on a proposal to extend protections into 2021.

New data shows an additional 201, 640 Californians applied for regular unemployment benefits for the week ending on Aug. 15. While that figure might seem large, it's the lowest weekly number since the end of the week of March 21.

"So now we're at risk of having 400,000 people, due to evictions, on the street. Homelessness could rise 20%. We can't have that," said Pastor Cue, an organizer of the protest.