About 10 million eligible California voters never vote or only sometimes vote in elections according to a survey released Thursday by the UCLA Center For Health Policy Research.
City News Service 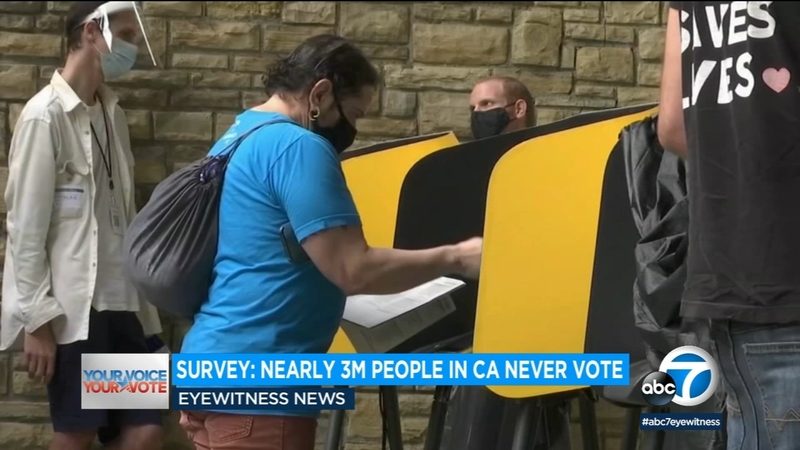 About 10 million eligible California voters never vote or only sometimes vote in elections according to a survey released Thursday by the UCLA Center For Health Policy Research.

According to the survey's data, about 2.8 million eligible voters in California never vote in national, state or local elections, and 7.7 million only vote sometimes.

The California Health Interview Survey is released each year and conducted through interviews with over 20,000 Californians on a range of topics, and the UCLA Center for Health Policy Research published a related fact sheet that shows that voting habits vary by type of election and race and ethnicity.

Researchers determined that Asian and Latino eligible voters were the least likely to vote in local elections, with 62% of Asians and 61% of Latinos saying they "never'' or "sometimes'' vote in those elections.

Infrequent voting was highest, 76%, among those who identified as "other Central American,'' which includes Costa Ricans, Hondurans, Nicaraguans, Panamanians and Belizeans, according to UCLA.

Those who identified as Chinese also had high numbers of infrequent voters, with 70%, whereas only 53% of Filipinos and 51% of South Americans said they vote infrequently in local elections.

Researchers asked why responders choose not to vote in local elections, and 21% cited not being informed and 20% said they forget to vote or do not think about it.

For those who responded they "never'' or "sometimes'' vote in presidential elections, 28% said it was because they dislike politics or political candidates, according to UCLA.