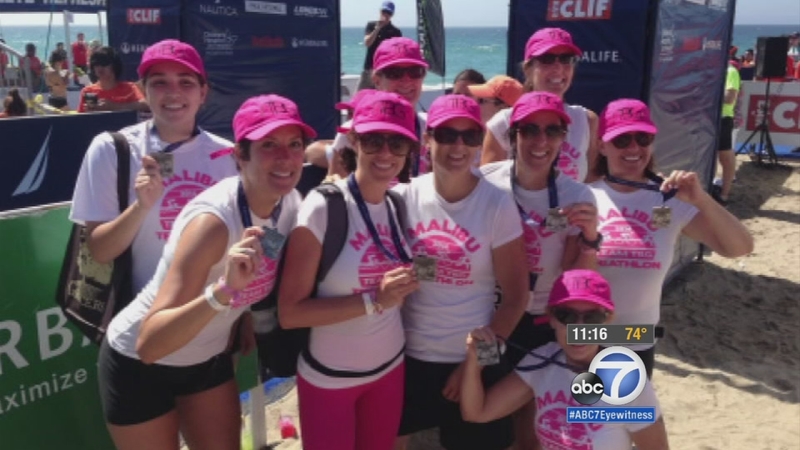 MALIBU, Calif. (KABC) -- A group of breast cancer survivors will challenge themselves and compete in the Nautica Malibu Triathlon next Saturday.

The competitors said training for the triathlon has made them stronger even after surviving the toughest challenge that changed their lives forever.

Candice Witek was only 33 years old when she was diagnosed with breast cancer. The wife and mother of three had a bilateral mastectomy. She was just finishing up chemotherapy one day when she heard staff at her plastic surgeon's office talking about competing in the triathlon.

"(The triathlon) just sounded like a great thing to look forward to at the time," she said. "I did look forward to it. I thought about it and I was determined to finish it even if I didn't run the whole thing."

It gives the women a chance to prove to themselves that they are stronger than they thought possible.

"What I do isn't so much about building the breasts, but really about helping them to feel that they're strong and beautiful and warriors. They don't know that they are, but they've already done a triathlon - they've done chemotherapy, surgery, radiation. That's a whole year out of their life," she said.

What started out with just two teams for the relay triathlon has turned into 18 teams, with 24 of those athletes being patients.

One of those patients is Liane Rosenberg, who said running is what got her through the roller coaster of battling breast cancer. But it wasn't until she crossed the finish line that she felt she had won.

"You run back into the finish line and there is this sea of pink Team TBG caps with everybody yelling and cheering, and it's such a great support system," she said.

As these female warriors train for the triathlon, they know they've already won the toughest race when they fought for their lives.

It is that life and death battle that connects them as a team, which gives them a whole new outlook on life.