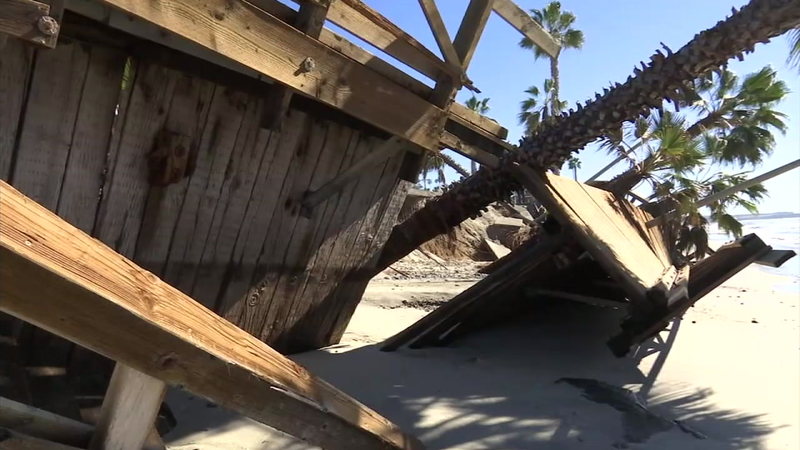 Sideways palm trees and a collapsed wooden walkway are just a few of the damages at the popular hangout and basketball court near the water.

"Rain plus swell plus high tide is going to equal coastal devastation," said Rick Erkeneff, with the Surfrider Foundation.

"It happened pretty quick, and it wasn't even that high of a high tide, so I couldn't even imagine on a 8 foot tide what it would've been," Erkeneff said.

About half of the wooden boardwalk collapsed as much of the sand washed away. Longtime residents said erosion is always an issue that's only gotten worse. Some said because of rising sea levels.

"They tried to put this all back together, all the walkway and everything and they re-did the basketball court and now it's all gone again," said Jackie Barr, from Dana Point.

"This was a really nice park that's been here for a long time is my understanding, and it's pretty scary stuff," Steve Taylor said.

The destruction even revealed parts of old cars we're told were filled with cement as a foundation back in the 1950s. Crews are now trying to determine exactly what they need to do to stabilize the area and the bathrooms.

An OC Parks spokesperson said any longterm decision will take more assessment. Erkeneff thinks the plan should be to move everything away from the water.

"Is it worth spending that good money on something like that next year? We could get another storm and take it out again. That's how we have to plan long range," he said.