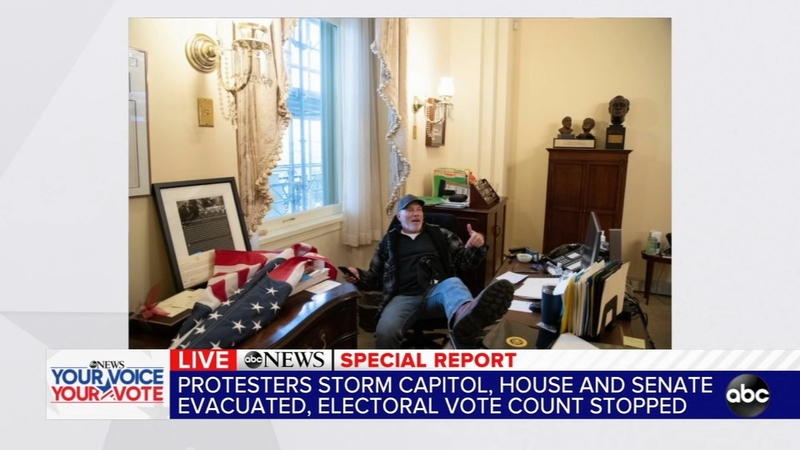 WASHINGTON -- A violent group of rioters loyal to President Donald Trump stormed the U.S. Capitol on Wednesday and forced lawmakers into hiding, in a stunning attempt to overturn America's presidential election, undercut the nation's democracy and keep Democrat Joe Biden from replacing Trump in the White House.

House Speaker Nancy Pelosi addressed Congress as the certification of Electoral College results resumed after a violent insurrection of Trump supporters at the Capitol.

One image captured a Trump supporter sitting with his feet up on the desk of Speaker of the House Nancy Pelosi.

The National Guard and state and federal police were called in for control, and the mayor of Washington imposed a rare evening curfew.

The chaotic protests halted Congress' constitutionally mandated counting of the Electoral College results, in which Biden defeated Trump, 306-232. Republican Senate Majority Leader Mitch McConnell had tried to steer Congress away from Wednesday's formal protest of those results, and he said at the start of proceedings that Trump had clearly lost.

Wednesday's ordinarily mundane procedure of Congress certifying a new president was always going to be extraordinary, with Republican supporters of Trump vowing to protest election results that have been certified by the states. But even the unusual deliberations, which included Vice President Mike Pence and Senate Majority Leader McConnell defying Trump's demands, were quickly overtaken by the chaos.

In a raucous, out-of-control scene, protesters fought past police and breached the building, shouting and waving Trump and American flags as they marched through the halls. One woman was shot during the chaos. ABC News has confirmed that she died.

At least one explosive device was found but law enforcement said it did not pose a threat.

More than a dozen people were arrested.

As darkness began to set in, law enforcement officials worked their way toward the protesters, using percussion grenades to try to clear the area around the Capitol. Big clouds of tear gas were visible. Police in full riot gear moved down the steps, clashing with demonstrators.

-- The Associated Press contributed to this report.