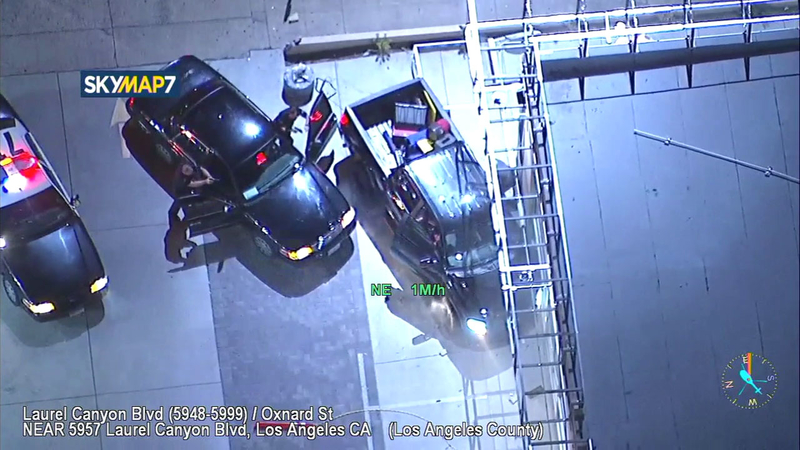 NORTH HOLLYWOOD, LOS ANGELES (KABC) -- Police in the San Fernando Valley were kept busy with a wild Wednesday night of three chases - two of them related - at high speeds over freeways and surface streets.

At least three suspects were taken into custody while another remained on the loose as of late Wednesday.

The first chase of the evening was of a suspected DUI driver through the North Hollywood and Van Nuys area, at speeds over 100 mph.

The pursuit started around 8 p.m. near Van Nuys, according to Los Angeles police. Two occupants were inside a white Dodge sedan with Arizona license plates.
At one point during the chase, the suspect caused another car to crash at Glenn Hill and Van Nuys Boulevard.

The suspect traveled on the northbound 405 and eastbound 118 freeways before exiting Glen Oaks Boulevard.

The suspect drove erratically, narrowly missing people on bikes, pedestrians and crashing into other vehicles.
The suspect then drove at speeds as high as 80 mph through surface streets in North Hills, Mission Hills, Pacoima, Arleta and Van Nuys.

Authorities ended up on the 118 Freeway as the suspect reached speeds of nearly 100 mph, weaving in and out of lanes and through other vehicles.

The suspect got back on the 405 Freeway, eventually exiting in Panorama City.

Both suspects then ran out of the vehicle, fleeing toward apartments along Van Nuys Boulevard.

The driver remained at large, but it appeared the passenger was taken into custody.

Shortly after that ended, a second one began in the same region - though there were no indications the first two chases were related.

Around 9:30 p.m. police began chasing suspects in an allegedly stolen vehicle, heading first northbound on the 170 Freeway from the Victory Boulevard onramp, then exiting onto Sherman Way.

The black sedan drove around the North Hollywood-Van Nuys area on surface streets and the 5 Freeway at speeds over 100 mph.

A suspect abandoned a vehicle under the 5 Freeway at Hollywood Way and fled on foot following a chase in a stolen vehicle.

After a few minutes, the car pulled under a 5 Freeway overpass at Hollywood Way and the driver apparently fled on foot. Police started looking for him in the neighborhood.

Soon after that pursuit ended, another began of a black F-150 pickup truck that quickly got onto the 101 Freeway heading north.

Early indications were that the truck may have been carjacked by the suspect who fled the black sedan.

The chase finally ended just before 11 p.m. when the pickup lost control, skidded and crashed into a pole at a gas station near Laurel Canyon Boulevard and Oxnard Street.

Police investigate the scene where a stolen pickup truck crashed in North Hollywood following a chase.

The driver exited and tried to run away with his hands up and was quickly tackled by officers.

A second man in the passenger seat was initially thought to have been a carjacking victim, but may have been a suspect as police handcuffed him and took him into custody in the back of a police car.

Earlier in the second pursuit, when the suspects were still in the black sedan, the vehicle was seen pulling over in a residential neighborhood in North Hollywood. The male driver exited and a woman passenger also exited and walked calmly away. The driver then jumped back in the vehicle on the passenger side and continued fleeing from police.