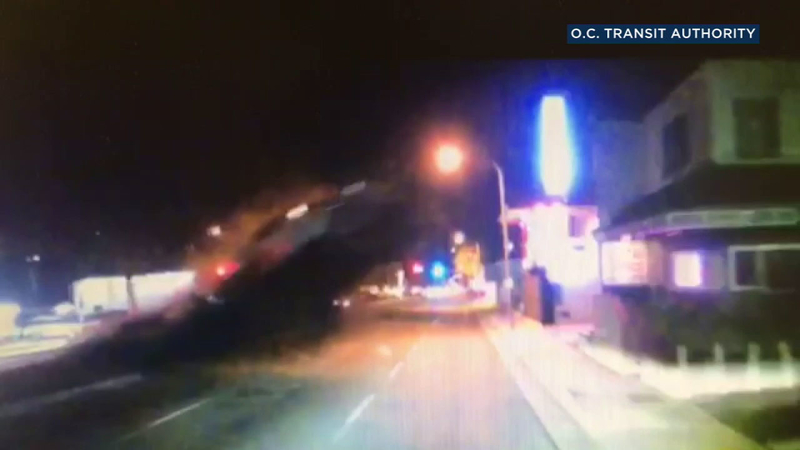 SANTA ANA, Calif. (KABC) -- Dramatic new video shows the moment a car in Santa Ana went flying into the air after it hit a center median at high speeds and launched into the second floor of a building.

The video released from an Orange County Transportation Authority bus shows the Nissan Altima fly into the air at a 45-degree angle just across the path of the oncoming bus.

The bus is close enough to the car's flight path that it drives through the cloud of dirt and debris kicked up in the car's wake.

The vehicle became lodged in a second story dental office near 17th and French streets.

The incident happened Sunday morning. Police and witness accounts indicate the vehicle came down a cross street at high speeds, crossing three lanes of traffic on 17th before hitting a mound of dirt on the center median, launching the Nissan into the air.

Witness Trevor Nunes, who was sleeping in a motel room nearby, ran outside after hearing the crash.

He saw the driver climb out and briefly hang from the side of the vehicle before falling to the ground.

At one point, he said, as police were arriving it looked as if the vehicle might fall down on top of the driver.

"He fell, then the car started rocking," Nunes said. "The cop threw him over the shoulder, put him over there. And he's all 'Are you my hero?'"

One passenger in the vehicle was able to free himself while another remained trapped inside and had to be freed by first responders.