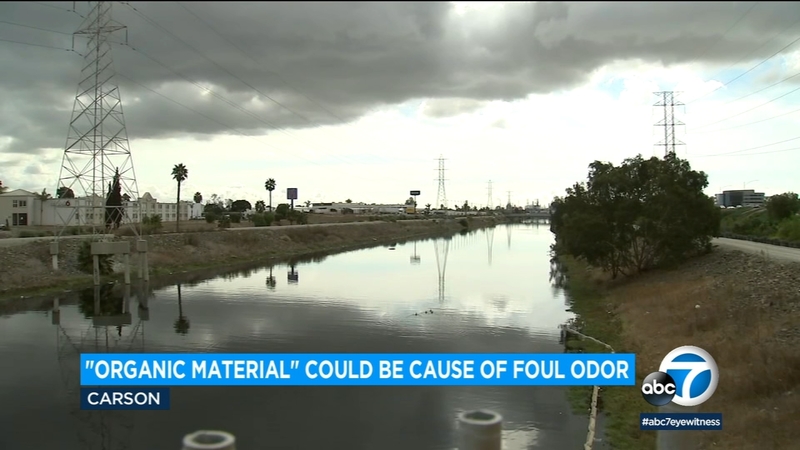 CARSON, Calif. (KABC) -- A foul odor in the air that has not gone unnoticed by residents in the Carson area is believed to be coming from an organic material drying out in the Dominguez Channel.

The Los Angeles County Department of Public Health and Public Works say preliminary finding indicate that the material was left on the channel banks during low tide. Authorities have also ruled out any kind of release from a nearby oil refinery or waste facility.

According to Carson Mayor Lula Davis-Holmes, the odor, which has been described as a combination of "The Walking Dead," rotten eggs and burning tires, is believed to be hydrogen sulfide.

Some Carson residents have been smelling something strange in the Dominguez Channel, which bisects the city from the interchange of the 405 and 110 Freeways to Pacific Coast Highway.

Low levels of hydrogen sulfide can cause residents to experience temporary symptoms such as headaches, nausea, eye, nose and throat irritation.

Although health officials say only long-term exposure can cause problems, Davis-Holmes is calling for an investigation.

"I'm hoping that expected rain in the forecast tonight will wash away the organic material and reduce or improve the odor situation. My question to all involved agencies is what is the problem, what is being done to correct it, who is at fault and what is being done to prevent it from happening again? We are continuing our efforts to communicate with all involved entities for a resolution."

Public health officials are recommending that nearby residents keep doors and windows closed as much as possible until the odor subsides.
Some have told Eyewitness News they have experienced the relentless odor since Monday, and that they have suffered nausea and other symptoms as a result.

"I lost my appetite. It's giving me bad headaches," said a resident named Twila, who declined to give her last name. She mimicked a gagging sound while describing the reaction of herself and her coworkers. "It's bad," she said.