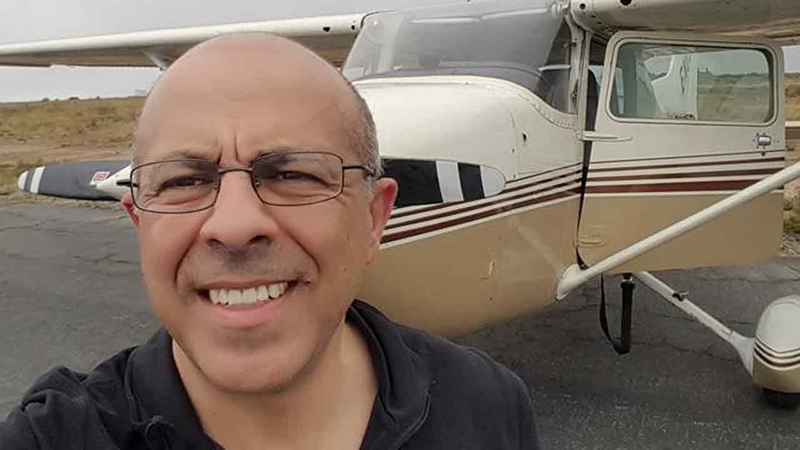 AVALON, Calif. (KABC) -- Authorities Monday were in search of a missing single-engine plane that departed from Catalina Island over the weekend and never made it to its Van Nuys destination.

The Cessna 172, carrying two passengers, departed from Catalina Island Airport at about 1 p.m. Saturday and was reported overdue when it failed to arrive at Van Nuys Airport between 3 and 4 p.m. Sunday, according to officials from the Federal Aviation Administration.

The aircraft was only described as having the tail number: N739ZE.

The family of pilot Edmond Haronian notified the U.S. Coast Guard of the missing plane on Monday morning, and both FAA and Coast Guard officials began a search by air. The family of the Woodland Hills resident said he is a father of two.

Eddie Bardi, Haronian's step son, said the family became concerned on Sunday when no one could reach him.

According to Alex Abbassi, director of operations at Encore Flight Academy, Haronian was a high-valued customer who was free to go where he wanted in the rented plane, as long as an instructor was with him.

The flight instructor was also said to be very experienced, with more than 30 years flying.

"He was doing very well...he's soloed by himself, flown by himself, under his instructor's supervision...and he's done very well. He's capable...," Bardi added.

Abbassi initiated the call to the Flight Service Station for a search-and-rescue team after he spoke with Haronian's family. He explained the aircraft was in good shape and passed a complete maintenance evaluation in March. Ambassi added the plane had only flown 60 hours since then.

Along with the help of the Coast Guard, the family chartered three helicopters to help scour the water for any signs of debris.

"It's just too much ocean to cover, really, and I believe the Coast Guard is on it, the FAA is on it...," Bardi said. "...The entire family is worried. He has many people that love him, many that adore him."

Authorities said the name of the flight instructor on the plane was not yet available, and the search was expected to resume Tuesday morning.
Related topics:
catalinaavalonsanta claritalos angeles countymissing personairplane
Copyright © 2022 KABC Television, LLC. All rights reserved.
TOP STORIES
Death toll rises to 21, mostly children, in TX school shooting
Uvalde school shooting: What we know about 19 kids, teacher killed
Watch Steve Kerr's raw, emotional plea after Texas shooting
CA water board adopts ban on watering some green spaces amid drought
Suspect wounded after CHP, deputies are fired upon in East LA
Mater Dei HS celebrates 3 Heisman Trophy winners amid controversy
More water restrictions expected this summer
Show More
Biden says 'we have to act' after Texas school shooting
What is monkeypox? CDC updates doctors as CA reports 1st possible case
11 killed in shooting attacks on 2 bars in Mexico
How to talk to kids about Texas school shooting
A look at some of the deadliest US school shootings
More TOP STORIES News