The proposal would require auto dealers to engrave the vehicle ID number on the devices on new vehicles.
City News Service 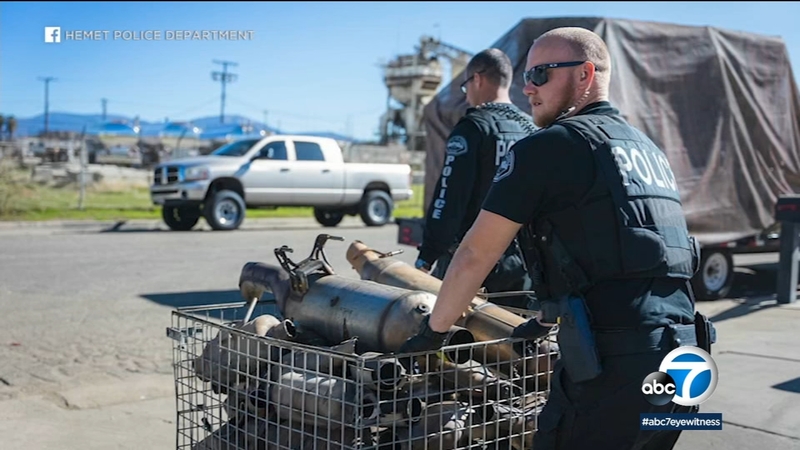 Gascón, who made a similar callout last October, noted that catalytic converter theft has been on the rise throughout the pandemic and noted that California is among the top five states in such crimes.

"These crimes are costly to consumers in both repairs and insurance costs. They also make us feel unsafe,'' he said. "The solution to this problem, interestingly enough, is very simple to a great extent. When a catalytic converter is stolen, it is untraceable. That means that those crimes cannot be solved unless someone is literally caught in the act -- something that is very difficult for the police to do.''

The measure, which is backed by state Sen. Thomas Umberg and Sen. Anthony Portantino, would ban auto dealers and retailers from selling new vehicles unless the vehicle's ID number has been engraved or etched onto the catalytic converter itself, and ban the cash sales of used catalytic converters by requiring recyclers to accept only traceable payment methods such as a credit card.

"We need to step up and give law enforcement the tools they need to track these parts and to put the folks who steal them behind bars,'' Portantino said Tuesday.

Umberg said he had participated over the weekend in etching numbers on catalytic converters in an effort that he said took him 40 seconds and would take a professional about 10 seconds, and said the measure seemed to be a "common sense solution'' to the rash of thefts.

Moore noted that one in five thefts from a vehicle in L.A. is a catalytic converter, noting that it has become a "very attractive market'' for thieves and a "difficult challenge'' for law enforcement officers.

Catalytic converters -- which are used to turn hazardous exhaust from a vehicle into less harmful gases -- are made of highly valuable metals such as platinum, rhodium and palladium and are worth up to $1,200 each, according to the district attorney's office.