Sierra Madre hit by rash of catalytic converter thefts, residents say problem is out of control 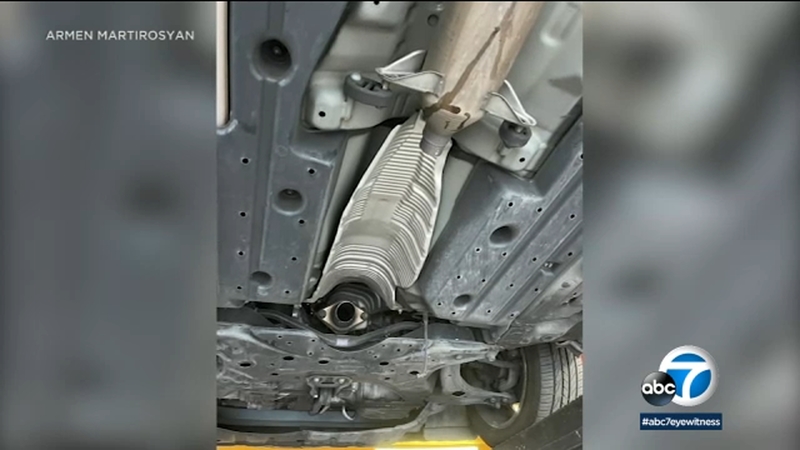 SIERRA MADRE, Calif. (KABC) -- Armen Martirosyan is just one in a fast-growing group of people who have had catalytic converters stolen from their car. Those thefts increased by 400% from 2020 to 2021 in Los Angeles County.

The small city of Sierra Madre has been dealing with a recent spree of catalytic converter thefts, city-owned vehicles included.

"Our city yards were actually one of the areas that got hit," said Sgt. Charles Kamchamnan of the Sierra Madre Police Department. "We had three vehicles, city vehicles, that were hit with catalytic converter thefts. A week after that, it was an additional seven more."

Kamchamnan says the thieves are fast and getting even more brazen. One car was hit while its owner was visiting a Sierra Madre hair salon.

"When she returned within an hour, she was hit with a catalytic converter theft," Kamchamnan told Eyewitness News. "In the middle of the day."

Over 50 stolen catalytic converters were confiscated, and citations totaling $56,000 in possible fines were issued to several auto businesses in Riverside County as part of "Operation Undercarriage," officials say.

Over the past year Duyrmandjian says he's gone from replacing stolen catalytic converters once a month, to once a week. The part alone starts at $700 and, depending on the car model, can cost more than $1,000. And that's before labor.

That is why California lawmakers are pushing bills through the legislature. If AB 1653 is passed, local law enforcement could tap into California Highway Patrol resources in these cases.

Sponsored by Assemblyman Jim Patterson, (R) Fresno, it will help investigators "trying to identify the places where they are getting paid for it, and stop the transaction so that it's no longer profitable," he said.

The proposal would require auto dealers to engrave the vehicle ID number on the devices on new vehicles and would ban cash sales for used catalytic converters.

If you want to protect your catalytic converter, you can have a steel cage installed that surrounds it. They cost about $400 and make it harder for thieves to reach the converter.

As for Martirosyan, he says the bad guys probably should have picked a newer car that didn't have a 14-year-old catalytic converter in it.

"That thing is useless," he told Eyewitness News. "It is shot. So I guess joke's on them."