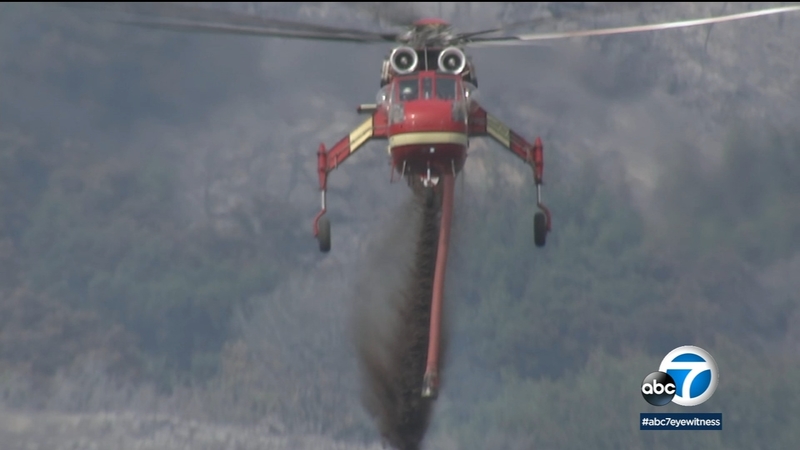 SANTA BARBARA, Calif. (KABC) -- Fire crews continued to battle a wind-driven brush fire in the mountains above Santa Barbara as thousands of residents were allowed to return to home Tuesday.

The blaze, dubbed the Cave Fire, scorched 4,262 acres at 0% containment by Tuesday morning.

Fire officials said as many as 5,481 people were evacuated and about 2,284 structures were threatened. One outbuilding was destroyed, however, there were no reports of injuries or homes lost, according to officials.

Mandatory evacuations were in effect with boundaries from Camino Cielo Road to Ontare Road. Orders for about 4,000 evacuees were later lifted for areas west of Patterson and Fairview avenues as well as north of Cathedral Oaks, according to the Santa Barbara Sheriff's Office. An evacuation center was established at the Goleta Valley Community Center, officials said.

Officials also noted southern parts of the county have experienced power outages due to the Cave Fire, which are not related to a public safety power shutoff.

Outages were reported in the unincorporated areas between the cities of Goleta and Santa Barbara, along Highway 154 through Mission Canyon and parts of Summerland and Carpinteria.

A major storm system moving into the area offered hope for fire crews that the flames would be doused overnight. The National Weather Service said as much as an inch of rain was expected to hit the area by midnight. Firefighters were told the area had not received any rain in 180 days and vegetation was ready to burn.

A debris flow evacuation warning was issued by the Santa Barbara County Sheriff's Office due to the storm expected. The warning was for the area between Patterson Avenue/Anderson Lane and Ontare Road, between the 3500 and 3300 block of State Street and down through Las Positas Road, and south of East Camino Cielo to the ocean.

Fire officials said the location of the blaze has created difficulties for crews.

"This is one of the last slots of old vegetation, and it's something we've all talked about for years and years, just a nightmare spot of right down the San Marcos Pass, where the winds funnel," Los Padres National Forest Fire Chief Jim Harris said. "The last time it burnt was 1990 in the Painted Cave Fire. And so we were all kind of ramping up as soon as we heard the start location."

"The rain that is forecasted, over the duration that it is coming, is not like how it was a couple years ago, where we had 3/4 inch of rain in five minutes," said Capt. Daniel Bertucelli, a spokesman for the Santa Barbara County Fire Deparmtent.

Santa Barbara County proclaimed a local emergency due to the Cave Fire.

Video from the blaze captured a family trying to escape via Highway 154, with flames surrounding their vehicle as they drove by. The person who posted the video said they followed a fire crew to safety. Highway 154 remained closed Tuesday between Highway 192 and Highway 246.

Strike teams from neighboring counties have been called in to help. Los Angeles County Fire also sent a "Firehawk" aircraft to assist with the effort. Meanwhile, multiple fire engines, along with hand crews and a water-dropping helicopter, responded to the scene.