Many rallied to support a state bill modernizing the voting procedures for farm workers.
KABC
By Sid Garcia 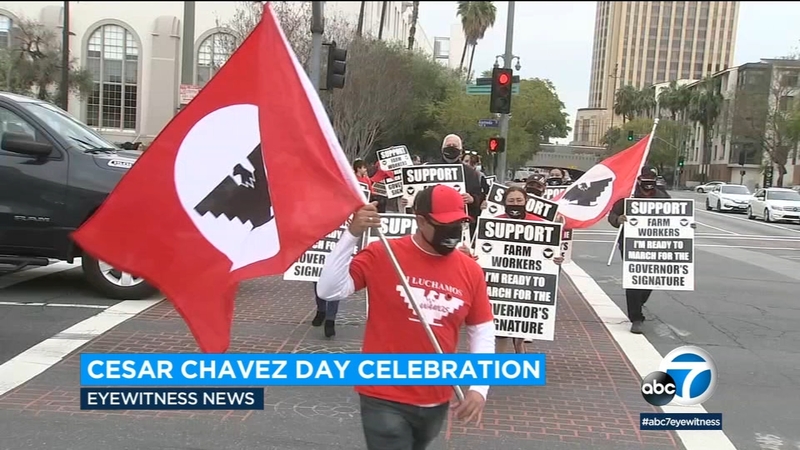 Thursday, which would've been his 95th birthday, marked Cesar Chavez Day - a state holiday in California.

Along Olvera Street, a group rallied at the intersection of Cesar Chavez Avenue and Alameda Street as similar gatherings took place across the state.

A reason behind the call to action was to drum up support for Assembly Bill 2183, known as the Agriculture Labor Relations Voting Choice Act. The state bill would modernize the voting procedures for farm workers to determine if they want to be represented by a labor union.

Another reason is to remind people of what the late labor leader stood for. Not only did Chavez organize farm workers, but he also pushed service to community.

"Chavez day, for us, is a day we're going to gather in community. For instance, last year, with the pandemic we spent time mobilizing for vaccination clinics, at times after the big citrus freezes we would have done food distributions," she said. "This is farm workers helping farm workers, and in general, being part of the labor movement."

Earlier this week, first lady Jill Biden was in Kern County for a naturalization ceremony ahead of the holiday.

Biden joined 31 people from nine countries as they took their U.S. citizenship oath of allegiance at the National Chavez Center in Keene. The event also honored farmworkers.

First lady Jill Biden was in Kern County Monday to take part in a naturalization ceremony ahead of Cesar Chavez Day later this week.