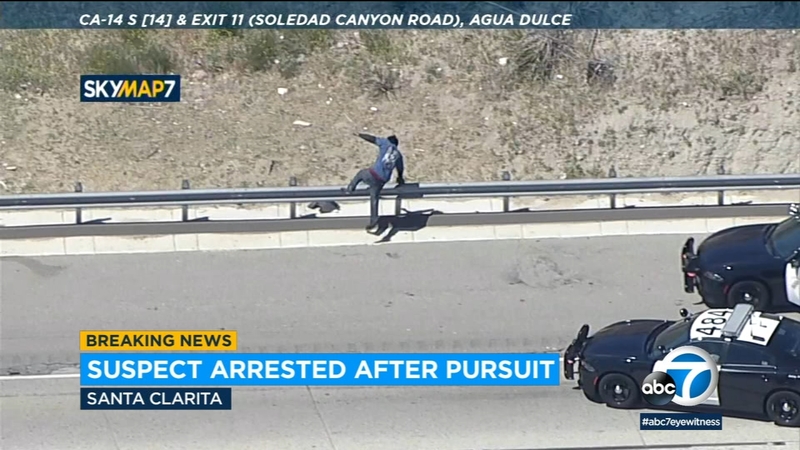 ACTON, Calif. (KABC) -- The driver of an SUV on Wednesday led authorities on a high-speed chase from the San Fernando Valley to the Palmdale area and back to Agua Dulce, at times reaching speeds of more than 110 mph before ultimately being apprehended.

The Los Angeles Police Department initiated the pursuit, which made its way from the intersection of Laurel Canyon Boulevard and Vanowen Street to the northbound 170 Freeway. From there the suspect headed toward the Newhall area before transitioning to the 5 Freeway and then the 14 Freeway.

LAPD units disengaged from the chase, and for a time the SUV sped toward Palmdale followed mostly by news media helicopters overhead.

In a bizarre moment, the suspect pulled over to the side of a dusty intersection and stuck his head out of the driver's side window, staring up at the choppers. He then sped away when a California Highway Patrol unit approached.

Re-entering the 14 Freeway, the driver raced southbound before abruptly pulling over in the Agua Dulce area and exiting the vehicle. CHP officers pulled up right behind him and gave chase as he tried to escape on foot.
EMBED More News Videos

The driver of an SUV was apprehended after a police chase that reached speeds of 110 mph ended in the Agua Dulce area on April 13, 2022.

The man ran into nearby brush but was soon apprehended by the officers, handcuffed and escorted to a patrol vehicle.

The circumstances that led to the chase were not immediately clear.