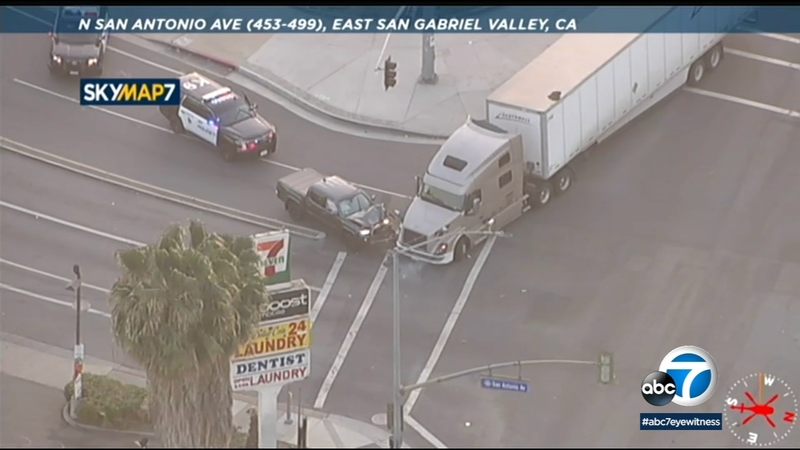 Chase of murder suspect ends in crash in Pomona

POMONA, Calif. (KABC) -- A fleeing murder suspect slammed into a tractor-trailer in Pomona, bringing an end to a dangerous and erratic chase across Riverside and Los Angeles counties Tuesday evening.

Several law enforcement vehicles were at the scene the moment the murder suspect crashed a pickup truck and surrendered near the intersection of Holt and San Antonio avenues in Pomona around 7 p.m. A passenger in the truck was taken into custody, questioned and later released.

The passenger, Roxy Rich, says the chase started around 5:30 p.m. in Temecula. She was surprised to learn the driver, a friend of hers from Bakersfield, was wanted for murder.

"He's an honest man... I don't know him like that, but I know him enough to know he's not a person to murder someone," she said. "He had to have a reason to react to an action."

The pursuit took a dangerous turn in Pomona. The suspect drove on the wrong side of the road, circled through a neighborhood, passed between police vehicles and then cut through a busy parking lot.

At one point during the chase, the suspect drove onto the sidewalk. The suspect also came close to hitting other cars on the road and ignored red lights to stop.

A fleeing driver slammed into a tractor-trailer in Pomona, bringing an end to a dangerous and erratic chase across Riverside and Los Angeles counties.

Footage from AIR7 HD showed that the driver of the tractor-trailer appeared to intentionally block the suspect. The suspect was taken to a hospital to be checked out, while Rich says she refused treatment.

AIR7 HD was over the chase around 6 p.m. as the driver was going at high speeds on the 60 Freeway. Prior to reaching Pomona, the suspect was in the east San Gabriel Valley area and driving over 75 mph with multiple officers behind.

Riverside County deputies and California Highway Patrol units were involved in the pursuit.