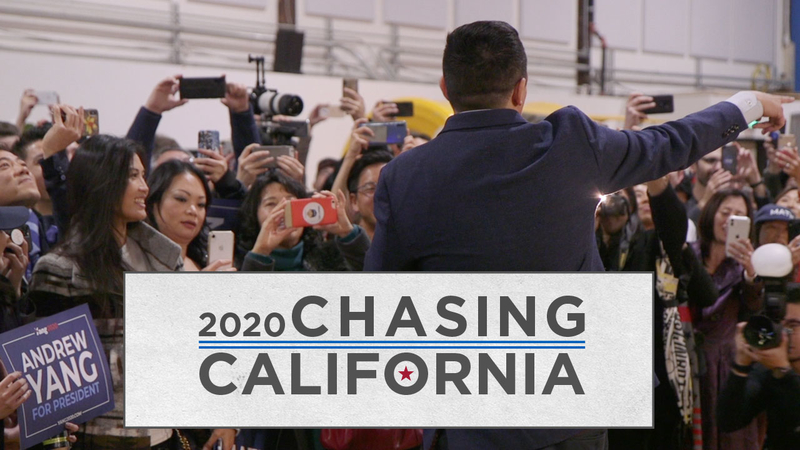 SAN FRANCISCO -- Andrew Yang is perhaps the most surprising candidate still in the Democratic race for president. Running on the platform that automation is displacing millions of jobs and the solution begins with $1,000 a month for every American adult, the 45-year-old tech entrepreneur has gone from a complete unknown to a rising competitor in the Democratic race.

An ABC News national poll from Jan. 26 shows Yang in fifth place, with 7% support. That's well behind the top three of Joe Biden, Bernie Sanders and Elizabeth Warren, but solidly in the second tier, just behind Michael Bloomberg and ahead of Pete Buttigieg and Amy Klobuchar.

It's been quite a year for Yang. In March 2019 when he sat down for one of his first TV interviews with KGO-TV anchor Kristen Sze, he had about 60,000 Twitter followers. As of January 2020, he has 1.2 million followers.

Yang went from running his campaign out of an apartment owned by his mother to raising a whopping $16.5 million in the fourth quarter of 2019, competing in Iowa, New Hampshire, Nevada and California. His loyal, passionate, tech-savvy supporters calls itself the "Yang Gang," and it is driving force behind Yang's unconventional and surprising campaign. The Yang Gang is vocal and visible.

We went one-on-one with the candidate during his recent visit to the Bay area. Yang told Sze, "California has a unique opportunity where you all can vote as early as any other state, and you can choose who the next president will be. So it's going to be an enormous priority for us."

Chasing California is an ABC7 Original Limited Series about the political fight for California.