The 78-year-old Vermont senator has 27% support among likely Democratic voters, according to a new Public Policy Institute of California poll, followed by Joe Biden with 24% and Elizabeth Warren with 23% support.

No, the lead isn't huge. One could say the three candidates are nearly in a virtual tie. But what is true: Sanders' support in California appears to steadily be rising.

One reason why? The Latino vote.

A survey from the Latino Community Foundation found that a majority of Latino registered voters in California support Sanders. He's raised more money from Latino donors than any of his rivals. He's also the only candidate with a campaign office in California's heavily Latino Central Valley.

With the California Primary moved up to Super Tuesday in March, ABC7 News went to Fresno, Calif. to explore Sanders' ground game and strategy to win California by winning the Latino vote.

Chasing California 2020 is an ABC7 Original Limited Series about the political fight for California.

Now more than ever, California votes will matter in determining the presidential nominee.

And stuff's about to get real.

The "Move to March" pushed the primary into the Super Tuesday mix--raising the stakes for the nation's most populous state. Now going into Super Tuesday, hundreds of delegates and millions of dollars are up for grabs. The Democratic nominee is undecided and unaffiliated and first-time voters are flexing their power. So, how do candidates harness that power? What lengths will they go to capture those golden votes in the 2020 California Primary?

Join the chase. Go inside the campaigns, and behind-the-scenes for one-on-one, exclusive access to the candidates. Hear from the people. Learn what it will take to win their votes.
Report a correction or typo
Related topics:
politicscaliforniafresnoprimary electionbernie sandersvotingpresidential racevote 2020elizabeth warrenjoe biden2020 presidential electionu.s. & worldchasing californiaabc7 originals
Copyright © 2020 KGO-TV. All Rights Reserved.
CHASING CALIFORNIA 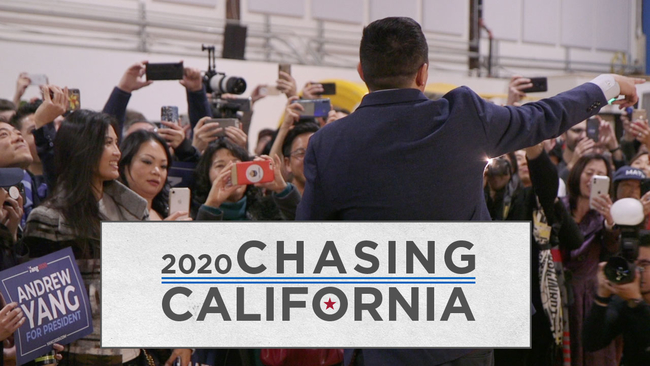