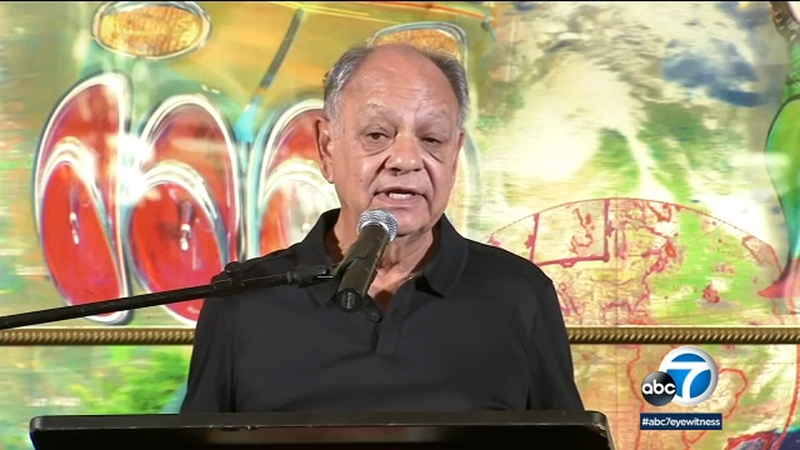 RIVERSIDE, Calif. (KABC) -- The Cheech Marin Center for Chicano Art & Culture is finally ready to open its doors to the public. The museum will house the largest collection of Chicano art in the world thanks to legendary comedian and actor Cheech Marin, who gifted his vast collection to the museum which carries his name.

On Thursday, city and civic leaders came together to officially dedicate the center affectionally referred to as the "Cheech" by gifting the 75-year-old comedian with a key to the city.

Marin spoke to the importance the museum will play in the art world at large.

"This building and this collection and this participation of the community will be a beacon for everybody else around the country," said Marin.

The 16,420 square-foot renovated space will display an estimated 700 paintings, drawings and sculptures that Marin began collecting more than four decades ago.

"I recognized it right away for what it was... I use the analogy, it's like hearing the Beatles for the first time," said Marin.

But despite the contributions of Chicano artists to the art world, Marin said he saw no spaces that displayed them.

The Cheech will also include a touring exhibition like that of the de la Torre brothers' retrospective, whose unique pieces draw viewers in for a closer look.

"Each individual work has a lot of layers a lot of meaning a lot of imagery and it's not only Mexican or Mexican-American, they draw from a lot of cultures," said curator Selene Preciado.

Preciado spent six years putting the 70-piece mixed media art pieces together for the exhibit. The collection is the work of artists and brothers Einar and Jamex de la Torre.

"Cheech was so happy and excited that it made us very excited that his collection was finally going to have a home and we were quite honored to be the first exhibition in the museum," said Jamex de la Torre.

The Cheech will also include a community art exhibit, video multi-purpose room and education studio.

It's located at 3581 Mission Inn Avenue in Riverside.