A fire department's ladder truck was used to decontaminate many of those affected.
CNNWire 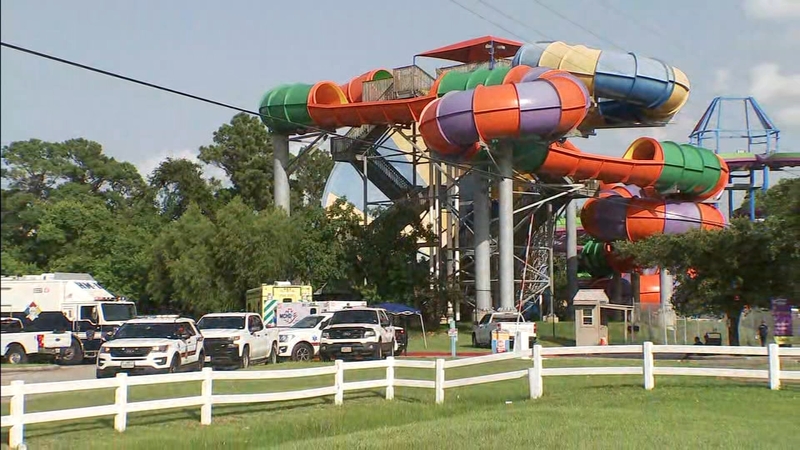 SPRING, Texas -- Around 65 people were sickened Saturday afternoon at a Houston-area water park in what local officials called a chemical incident.

"In the area around the kiddie pool in this water park, a lifeguard was sick, and soon after that, more and more people began becoming sick," Harris County Judge Lina Hildalgo said in a news conference outside Six Flags Hurricane Harbor Splashtown in Spring, Texas.

"What began as a fun family day has turned into very much a nightmare for many families," she said.

Public health officials are ordering the park to remain closed until they determine exactly what happened.

"The chemical combination was about 30-35% sulfuric acid and 10-13% bleach, and that's all we have at this time," said Spring Fire Department Chief Scott Seifert.

Most patients had what Seifert described as "respiratory distress."
EMBED More News Videos

SkyEye13 hovered above Spring's Hurricane Harbor Splashtown after more than 60 people were decontaminated when a possible chemical spill infiltrated a kiddie pool.

A 3-year-old girl was the "most serious case" and was taken to Texas Children's Hospital but is now stable, according to Hidalgo. Another victim was a pregnant woman who was believed to be in labor as she was transported from the park, said Hidalgo.

By Sunday morning, 28 patients at the Memorial Hermann Hospital group in Houston had been treated and discharged "in good condition," hospital spokesman George Kovacik said.

Anyone who was at the park and begins to feel ill should seek medical attention, Hidalgo said.

"If you feel sick, call 911. If you find yourself in the emergency room, please, as soon as you walk in, let them know that you were here. Do not sit in the waiting room with other folks because we don't know yet exactly what chemical, what caused these illnesses. And so we don't want to expose other folks to that," she said.

Chief Seifert said 26 people were taken to area hospitals and 39 refused transport. He said they were decontaminated before leaving the park.

"What we do is we set up our ladder truck that has a nozzle on the end, we point it straight down about 15 feet above where the people will walk through, and they walk through there and they basically massage their eyes and things like that to get any chemicals out of their eyes if they're affected. And then, after a period of time, they'll walk through it and walk out," Seifert told reporters.

The park was last inspected June 29, according to Harris County Fire Marshal Laurie Christensen, with nothing problematic found at the time.

"The safety of our guests and team member is always our highest priority and the park was immediately cleared as we try to determine a cause," park spokesperson Rosie Shepard said in a statement to CNN affiliate KPRC Saturday evening.