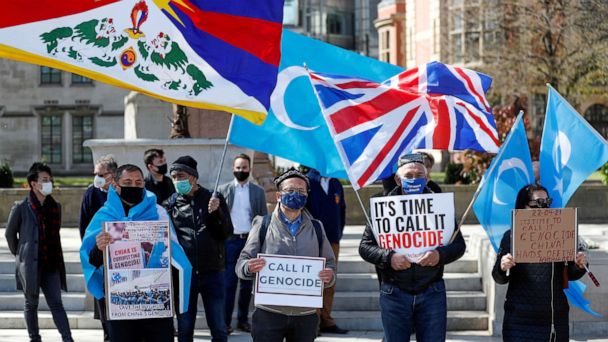 Chinese birth-control policies could cut up to 4.5 million births of Muslim minorities living in the country's Xinjiang province over the next 20 years, according to a report published Tuesday morning in the Central Asian Survey, a quarterly academic journal.

China's Xinjiang province has received increased attention from journalists and human rights organizations over the last several years. Up to 3 million Turkic Muslims are, or have been, detained in "vocational centers" throughout the region, according to the U.S. State Department and human rights activists.


The Chinese government does not deny the existence of these facilities, but instead says they are part of "anti-terrorism and de-radicalization efforts in Xinjiang in accordance with the law to protect people's lives."

These detention centers and other alleged atrocities, including forced birth control measures, are why some Western countries like the United States have accused China of genocide in Xinjiang.

The Chinese government vehemently denies that any forced sterilization occurs in Xinjiang. The government does say it is promoting birth control throughout the region -- touting a lower Uighur birthrate in a recent study.

However, this new report states that regional policies could cut between 2.6 and 4.5 million -- or up to a third of minority births within the Xinjiang region in the span of two decades. Official data shows birth rates have already dropped by 48.7% between 2017 and 2019.

"A smaller ethnic minority population will also be easier to police, control and assimilate," states the report's conclusion.

This new research, by Adrian Zenz, a researcher at the Victims of Communism Memorial Foundation, is the first peer-reviewed academic paper on the long-term population impact of China's crackdown of its Turkic Muslims in Xinjiang. The report includes a wealth of research produced by Chinese academics and officials that discuss Beijing's birth control policies in Xinjiang.

The report concludes that by 2019 Xinjiang authorities "planned to subject at least 80% of women of childbearing age in the rural southern four minority prefectures to intrusive birth prevention surgeries, referring to IUDs or sterilizations."

Several Turkic Muslim women from Xinjiang, who've since escaped, have spoken about being subjected to strange injections and medications while detained in these "vocational centers."


"They made us [women] take pills," Gulzira Auelkhan told ABC News in May. "The guards would stick their fingers in your mouth to make sure you swallowed the pills."

Gulzira Auelkhan said she spent 15 months in a Xinjiang facility. She believes these pills were part of a forced sterilization strategy, adding that Chinese officials told her "it was forbidden to be pregnant."

ABC News cannot confirm what was in these apparent pills, but the event she described is very similar to others who have spoken with ABC News and other news outlets.

Zenz's report goes on to claim that China's birth-control policies could increase its Han population in Xinjiang from 8.4% to about 25% by 2040.

China has a history of coercive birth policies - most notoriously the 36 year long one-child policy which minorities like the Uighurs were exempt from.

Between 2014 and 2020, there was a strict implementation of birth control policies in Xinjiang, all driven by national security concerns and motivated by a desire to dilute the Uighur population, according to the report's analysis of Chinese state-funded documents.


Much of this report resembles the opposite of China's announcement last week that it would allow couples to have up to three children, after census data showed a steep decline in national birth rates.

Wang Webin, spokesperson of China's Ministry of Foreign Affairs, commented on Zenz's new research Monday after it was first reported by Reuters.

"We've debunked how Adrian Zenz spread lies and rumors on Xinjiang to smear and attack China in various despicable ways," said Webin. "His so-called reports are by no means to be trusted."

Zenz continues to dismiss the Chinese government's attacks on his work as propaganda. He told ABC News his new work provides "evidence of their intent to commit genocide," adding that this new report will add new pressure as it is the first to be peer-reviewed.

ABC News has reached out to the Chinese government for additional comments regarding specific allegations outlined in Zenz's report.

Zenz is a researcher at the Victims of Communism Memorial Foundation, a Washington DC-based "anti-communist" organization that aims to "educate Americans about the ideology, history and legacy of communism."