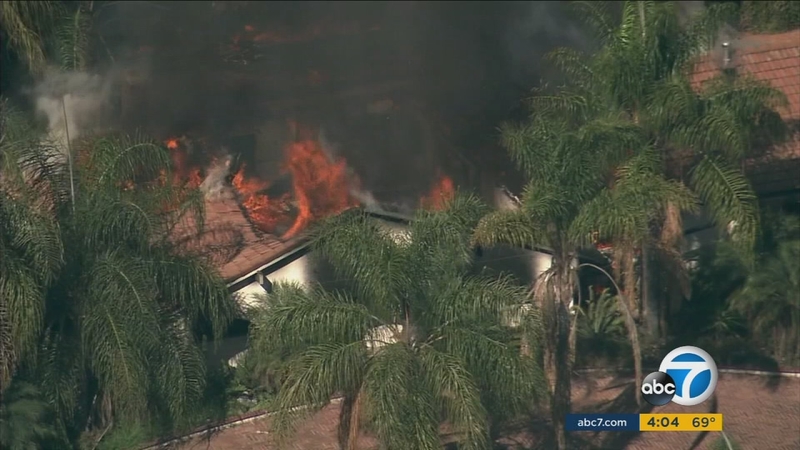 CHINO, Calif. (KABC) -- A house erupted in flames during a standoff with a barricaded suspect in Chino Wednesday morning. Police believe the suspect is dead, but a body has not yet been located.

The incident happened in the 11400 block of Santa Anita. A deputy from San Bernardino County Sheriff's Court Services was serving an eviction at 8:19 a.m. when a gunshot was heard inside the home.

A SWAT team responded to the scene, and there was a barrage of gunfire. The suspect fired several shots at officers from within the house, and officers returned fire.

Authorities say chemical canisters were fired into the home, and shortly after that, the house was engulfed in flames.

Nearby residents were evacuated as the fire raged. Some firefighters were seen wearing bulletproof vests as they fought the blaze.

The fire has been knocked down, but the suspect's body has not been found.

The suspect's relative told police that the suspect told him on Tuesday that he planned to burn the house down and commit suicide.

Neighbors say the person who was living in the home had been there for years. Records show the home went into default in 2012, finally selling at auction a few months ago to Ken Angel.

"There was an eviction scheduled today, and nobody wants to move I guess," Angel said.

A search for the suspect's body will continue once the home cools down. Police said it's too hot in the house for a thorough search after the blaze.