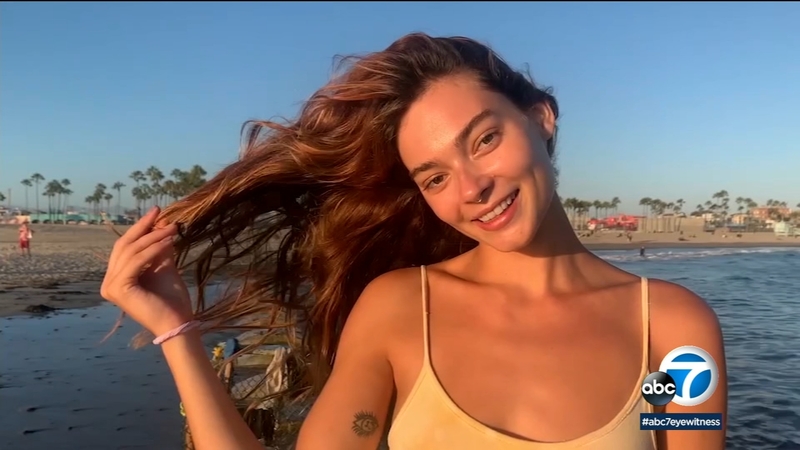 LOS ANGELES (KABC) -- Family and friends are seeking answers after a 24-year-old woman died following a night out with her friends in Los Angeles.

"People share these amazing videos that they have with her, and it just brings back her energy, and I know I'll never get to see her or kiss her or touch her again, and it's just so heartbreaking," said a tearful Jan Cilliers, Giles' husband.

Cilliers was in San Francisco this past weekend visiting his father while his wife stayed back in LA.

Giles went out partying with two friends Friday night. Saturday night at 5 p.m. - nearly 12 hours from when she was last heard from - Cilliers says Giles' body was left on the sidewalk outside Southern California Hospital in Culver City, where she was pronounced dead.

Cilliers says there's video of a car without license plates and men concealing their identities placing her body there.

One of the friends Giles was with went home. The other friend, Hilda Marcela Cabrales-Arzola, was left at a different hospital two hours later. She is in critical condition at a Kaiser Permanente hospital in West L.A.

"Marcela's toxicology report came back, and I guess they found heroin in her system, which is nothing that either of those girls would ever do, not voluntarily," Cilliers said.

Cilliers and Giles shared their locations with each other for safety via their cellphones.

According to the friend who went home early, the two women met some men while at a party in downtown L.A. and ended up at a West L.A. apartment building.

"I've got all the messages that she exchanged with anybody else that night and she was texting Marcela, the girl that she was with, at 5:30 saying let's get out of here with the wide eye emoji," Cilliers said.

No messages were sent or checked after that, according to what Cilliers has found via iCloud.

The LAPD tells Eyewitness News the preliminary investigation reveals a possible overdose which turned fatal. But Cilliers suspects there was foul play and wants whoever the women met that night to be held accountable.

A GoFundMe page has been setup for Christy Giles.