The mom claims there's video of men concealing their identities placing her daughter at a hospital, where she was found dead.
KABC
By Christiane Cordero 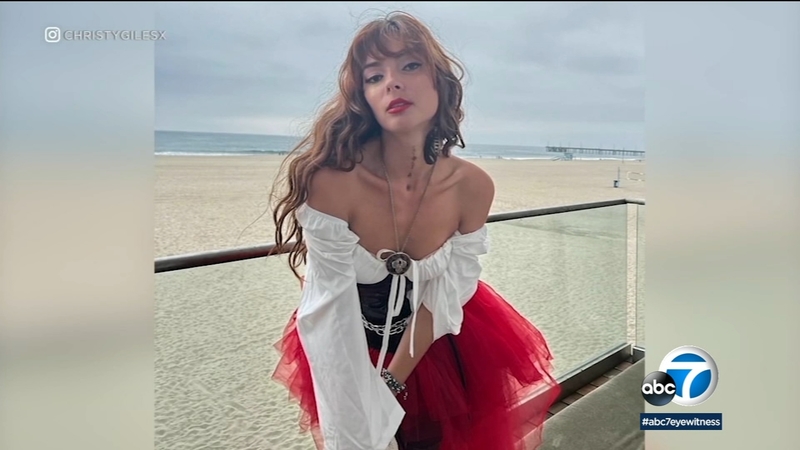 LOS ANGELES (KABC) -- The mother of a model and aspiring actress who was found dead in Culver City believes there's more to be uncovered than what police are reporting.

Christy Giles, 24, went out partying with two friends in West Hollywood Friday night and ended up at a nearby apartment.

According to her husband, Jan Cilliers, his wife sent a text message to Hilda Marcela Cabrales-Arzola at 5:30 a.m. on Saturday saying, "Let's go" with a shocked face emoji.

Cabrales-Arzola, who was reportedly the only friend with Giles at the time, replied saying, "Yes. I'll call an Uber. 10 min away."

The text message exchange is alarming for Giles' mother, Dusty Giles, who feels like her daughter may have been held against her will.

"The Uber waited additionally five more minutes," said the mother from her home in Alabama during a Zoom interview with ABC7 on Thursday. "The girls nor any of the boys in the apartment ever came out to wave off the Uber, to address it, to ask him to wait. Nothing."

The family told Eyewitness News the girls were dropped off outside of separate hospitals early Saturday, almost 12 hours after the text message exchange.

No messages were sent or checked after that, according to what Cilliers has found via iCloud.

They claim there's video of a car without a license plate and men concealing their identities placing Giles at Southern California Hospital and Cabrales-Arzola at Kaiser Permanente hospital in West L.A.

"These men did something to subdue and keep my daughter in their apartment for 10 to 12 hours," said the model's mom.

Doctors told the family Giles was dead when she arrived.

"I feel devastated. I cry every day," said Cabrales-Arzola's father Luis Crabrales, who flew in from Mexico Sunday and has been by his daughter's side ever since.

"Marcela's toxicology report came back, and I guess they found heroin in her system, which is nothing that either of those girls would ever do, not voluntarily," Cilliers said.

Cilliers and Giles shared their locations with each other for safety via their cellphones.

According to the friend who went home early, the two women met some men while at a party in downtown L.A. and ended up at a West L.A. apartment building.

However, Cilliers and Giles' mother suspect there was foul play and wants whoever the women met that night to be held accountable.

The LAPD West Bureau says its investigation is ongoing.

Officials concluded Giles' autopsy, but the cause of death was deferred to a toxicology report, which could take weeks to be released.

Giles' mom said she plans to fly to Los Angeles Saturday to attend a memorial for her daughter and said she's determined to get answers.

"It means a lot to us that our daughter touched so many in her short but yet wonderful, extraordinary life," she said.

A GoFundMe page has been setup for the 24-year-old.