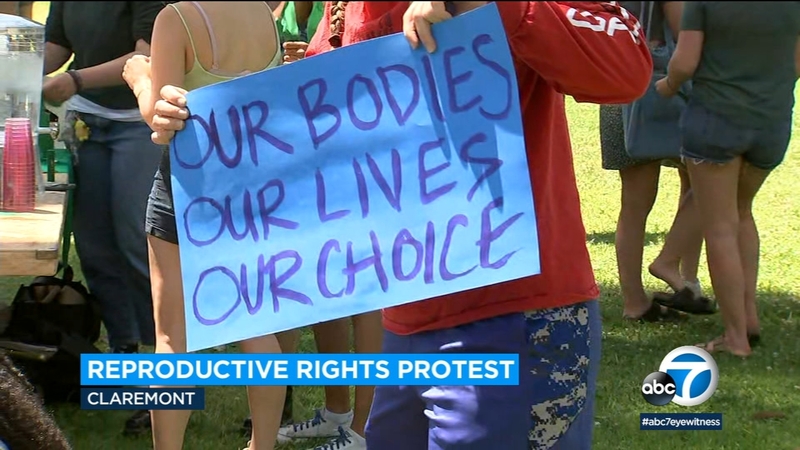 Large group rallies in Claremont in support of reproductive rights

A crowd of about 100 people gathered in Claremont Thursday in support of abortion rights. Students at Pomona College participated in a nationwide reproduction freedom protest.

This comes after the leaked 96-page draft opinion from the Supreme Court revealed that a majority of the justices were in favor of overturning Roe v. Wade later this year.

The case has been the basis of abortion law across the country for nearly 50 years. If overturned, it would be up to individual states to determine abortion laws.

In a stunning breach of precedent, both in constitutional law and Supreme Court protocol, a draft decision that would end Roe v. Wade was apparently leaked to the outlet Politico.

In Los Angeles, demonstrators held a protest outside the U.S. federal courthouse.

The debate over reproductive rights has many worried that overturning abortion rights would also impact other landmark cases.

"It's always disturbing when you know that the majority of people in the United States supports something, but you see the government doing the opposite," said Shelby Luster, an activist. "So you don't see democracy occurring as it should."

WATCH | What is happening with Roe v Wade? What to know about Supreme Court leak
EMBED More News Videos

"We have the opportunity to gather the 60 plus percent of Americans who are against an overturned Roe v. Wade and get them out on the streets," said Julianna Bernado, organizer for Rise Up For Abortions Rights. "SCOTUS has been subjected to popular sway before, and we can do it again. That's how we got Roe v. Wade passed in the first place. And it's not too late."

A majority of the protesters at Pomona College Wednesday wore the color green, typically the international symbol of abortion rights. There are culminating protests that are going to be taking place on Sunday, which is Mother's Day, in a major coast-to-coast protest for supporters of abortion rights.