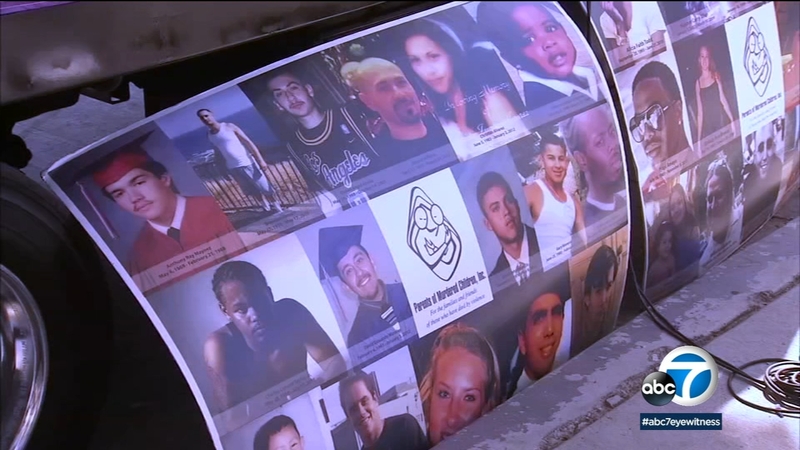 Parents of Murdered Children frustrated with backlog of unsolved cases

LOS ANGELES (KABC) -- "There's 5,000 unsolved murders in L.A. County," said Cathy Familathe of the Los Angeles chapter of the support group Parents of Murdered Children. "They're not always children -- we represent anybody that's lost somebody to homicide.

"So, 5,000 is ridiculous -- that's crazy," Familathe told ABC7 at a rally on Monday, the second day of National Crime Victims' Rights Week. "Those people are literally getting away with murder."

Familathe said she has lost three cousins and a nephew to violence. She said those responsible for the tragedies were caught, yet the overwhelming grief remains.

"It's like losing a child -- the pain never goes away," she said.

Familathe has joined other groups advocating for more resources for law enforcement to help solve cold cases. She said she is heartbroken for parents of murdered children who are still seeking justice knowing the killer remains on the loose.

Wealthy socialite Rebecca Grossman, accused of running over and killing two young brothers while she was street racing, made her preliminary court appearance in Van Nuys.

"You know the person who killed you kid is walking the streets or eating a good meal or spending Christmas with their family -- it's not right. Some of those families, their pictures of their loved ones are on my board," she said, referring to the collage of victims' photos on the memorial poster she was carrying.

Speaking at Monday's rally, a woman named Emma said: "I'm a parent to a murdered son. The pain never goes away. For me as a parent, the pain exists on a daily basis."

Familathe and Emma have joined with other groups advocating for parents of murdered children and demanding more resources be provided to cold-case detectives to help solve the thousands of unsolved murders throughout L.A. County.

"I do not believe in defending the police," Familathe said. "We need them. These detectives are solving all these cases or working on them or trying -- and defunding them is definitely not going to get those 5,000 fixed.